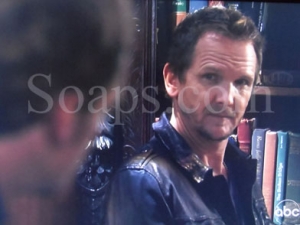 The last time we saw Jerry Jacks in Port Charles he was shot by a mystery person while he was working for the Balkan. Presumed dead, he is back and revealed to be the one pulling Dr. Keenan’s strings when it comes to “caring” for Robin. But why? And how does he know Ewen?

Who do you think Ewen is? Vote below and check out the latest General Hospital Weekly Blog for more about everything that happened this week on “GH.”