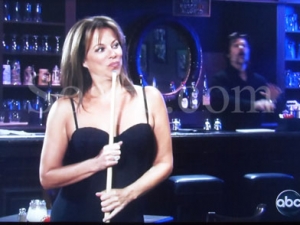 Trey and Joe Jr.
Okay, so it is obvious by now that not only did Trey have no idea he was descended from mobsters, but he also has no idea Kate is his real mom. And, I was shocked by this, he seems to actually have a heart. Too bad his goon of a father is using that to his advantage. If he truly cares about Trey like he says he does, in no way would he force his son into marrying someone he didn’t love in order to get back dirty mob money. But, it seems Joe Jr. has been grooming his son for this his whole life. How hilarious that when he decides to go through with his plan and kisses Kristina she lays some pretty heavy stuff on him. Not only was she beaten by the last guy she has been with, he “died” but would not go into details. Talk about a red flag! He even tried to call daddy to get out of it, but no deal. I am pretty sure he is going to fall in love with her for real as these types of things tend to happen, so we’ll see how far Trey is willing to go along with dear old dad.

Todd and Johnny.
This could get interesting for sure, but what is driving me crazy is how far Todd is willing to let this go considering Johnny’s crimes are far worse off than what he did. I mean, come on, Johnny killed his granddaughter! And he is going to let Starr, whom he claims to be so protective of, continue to be blinded by Johnny and his false goodness. That is just crazy. Let’s not forget that Todd still has all the video evidence of Johnny’s misdeeds (including desk sex with Carly), but he is not the only one. All of that footage went to Heather’s computer too, we just don’t know when or how that will ever come out.

Ewen, Liz and everyone else.
wow, it really seems to me that everyone else has more of an interest in where Liz’s romance is going with Ewen than she does herself. As for Ewen, now that we know who he is dealing with, how can he even do this to Liz if he really cares about her? He obviously knows all about Jerry’s history with Liz, taking her hostage with Jason. I guess the real question is, how far back does Ewen’s history go? Ewen just appeared out of nowhere last year when he rescued Liz from drowning and took her to that island. I can’t wait to hear what she has to tell Jason about what has been bothering her about Ewen since then. Hopefully we won’t have to wait too long before we find out who he really is and where he came from. Who do you think Ewen is? Take our General Hospital Poll: Ewen’s boss.

Shirts optional.
So it was a battle between Trey and Shawn for the best bare chest award this week, and hands down, no question Shawn takes top honors. It was so good, the producers reran it over and over. Meanwhile, Trey looked so uncomfortable wearing just his jeans and his medal that I couldn't wait for him to put his shirt back on. Shawn's confidence helped put him over the top, but so did his arms. Crazy! Alexis certainly noticed, and I am pulling for her to get a little bit of that action.

Dante and Lulu.
I really loved Dante this week. He really knows how to handle Lulu, but I am not sure she really deserves him. I am kind of hoping she grows up a little and realizes what she has in her husband. And since these two carry the weight of being one of the only married couples in town, it would be great to see them work and grow together instead of cutting bait when things get tough. She needs to stop keeping secrets from him, but that is a hard lesson to learn.

Blind faith.
Carly and Starr are really starting to piss me off with their total faith and trust in Johnny. They both sounded so stupid as they, separately, went off on Todd for trying to dig up dirt on Johnny. Even Carly herself admits she expected something horrible to be on the tape when Todd told her about it. Go with those instincts girl! She may not know much, but at the very least she knows he knowingly slept with a mental patient in order to get revenge on her ex-husband and father of her child. What? She is going to be so embarrassed when this all goes down, and that doesn't even include the sex tape that will most certainly surface somehow, some way. Oops.