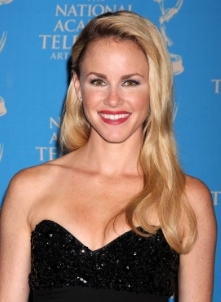 Julie Berman’s (Lulu) “The March Sisters at Christmas” will premiere on Lifetime on November 24 at 8:00 PM EST. As reported earlier, the film was previous titled, “Orchid House.”

You can catch a preview of it on Lifetime.

According to Soaps In Depth, “General Hospital’s” Julie Marie Berman (Lulu) is starring in the independent film, “Orchard House.” The film will be an updated version of the classic novel “Little Women” by Louisa May Alcott. The book revolved around four sisters in the 1800s. Berman will play Jo, the tomboyish sister with literary ambitions. Filming has started in Grafton, MA. Former “All My Children” star Justin Bruening (ex-Jamie) will also be appearing in the movie. Look for him as Teddy, a man in love with Jo.

For other places to see stars from “GH,” be sure to check out the Tormented Souls Trailer Featuring Kelly Sullivan.