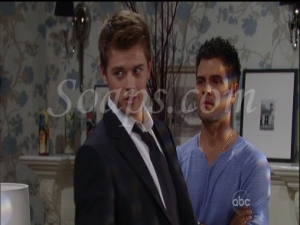 So producer Trey has breezed into Port Charles to film the dysfunctional family life of Kristina and crew for “Mob Princess.” But many posters think Trey has more of a back story than just Kristina’s crush and is in town to do more than flash his abs and spar with Starr. “We already know that Richard Steinmetz is coming on as Joe Jr., and soon,” Tassa_kay says. “We also know that Kate has a son with him that she abandoned. What better way to bring him on-canvas?”

What do you think Trey’s true intentions are? Vote below and check out the latest General Hospital Weekly Blog for more about everything that happened last week in Port Charles.