On Thursday's By The Book, Anna took charge at the station, and got Delores to confess to spilling secrets to Johnny in no time. Guilty conscience much? But it also got Dante and Lulu to swap secrets about what they know, and I wonder who Dante thinks he is, telling Lulu she has to come clean but not thinking he would have to. Johnny is still being haunted by his deeds, this time by an age-progressed Hope. Yikes! Talk about scary. He can't live like this for much longer, but I can only imagine it is going to get much worse for him before it gets better. And what is with Jason? He literally runs to Liz when he has any problem with Sam, and then acts like he has every right to interrupt her date, no matter how uncomfortable it makes everyone. He knew her head would not be in the dating game after his little visit. Best scene of the day, however, was Heather cuddling a knocked-out Luke. She is crazy!

Finally, Todd meets a shirtless Trey on Friday's French Word For Shower and calls it like he sees it. Now, if I had to compare my favorite set of abs between these two, I have to go with Todd. He does not have the benefit of time like Trey does, but he certainly is much more fun to watch. Needless to say Todd is going to be keeping a very close eye on him. Meanwhile, an unconscious Luke is keeping two ladies waiting very anxiously for his return, and when Tracy went to look for him finds Anna, waiting for him with another romantic dinner. This should get interesting, although I have a feeling after Lulu's little talk with Anna about how Luke likes to avoid problems at all costs, it will be quite a while before people put two and two together about this caper. Sam and Spin dig back into work, but their snooping skills need serious work after the debacle in Todd's room. Really? No warning signal? Evidence moved around? I loved the scene between Todd and Spin, but was curious why he did not think an article clipped out about Sam's tragedy would not seem out of the ordinary to him. What? And after a close call at the casino, Heather was able to drag Luke out of there undetected. Let's just assume this championship dead-body lifter has arms of steel.

Did you miss any of our Emmy Coverage? If so, check out our Soaps.com Daytime Emmy Live Blog and Jonathan Jackson Red Carpet Emmy Interview. 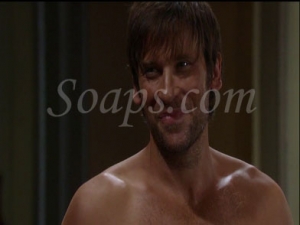 Credit: Finally letting her have it. (Soaps.com)

A slower week than we have seen in Port Charles for a while, but that was fine with me. There has been so much murderous, body hiding, baby snatching drama in the last few weeks that we need to regroup. And revel in all of the Daytime Emmy wins the “GH” crew raked in this past weekend. Congratulations to everyone, and we hope this only means many more years with our favorite show. Check out Kristen Alderson’s Red Carpet Emmy Interview.

Monday’s Hospitality Isn’t My Thing started off with a shirtless Todd. I guess Michael doffing his shirt last week got such a good reaction they thought they would keep the ball rolling. I love that Todd does not take himself so seriously, even when he is involved in some serious crimes. And I love that Carly reacted like a little school girl under her cool-as-ice exterior. It was revealed that with Todd’s media purchase, he also acquired Crimson. Very interesting. I am so looking forward to seeing what happens with these two as their storylines explode. Poster Unicorn Girl said, “I love Carly and Todd together and that’s something I never thought I’d say. The actress’s eyes actually seem to twinkle when they’re in a scene together. That’s chemistry!” Spinelli made some great strides in finding out Heather’s whereabouts the night of the storm. His dynamic with Olivia has been fun, especially as more and more Steven seems so wrong for her. How does he not know what Heather is up to? The baby’s funeral was very minor, most of it happening off camera, and I was kind of glad for that. I’m ready to move this story along to when Sam gets her baby back. As for Heather, love that she is going to really twist the knife in Todd by giving her a job at the paper. She doesn’t know who she is messing with.

So after Anna and Luke did the deed, they decided to get serious about what comes next on Tuesday’s Did I Say That. But here comes Heather again, who happens to be everywhere this week, listening into all kinds of conversations. Forget Steve. If Olivia is so concerned about what Heather is doing, why isn’t she with her? I know some people are over Heather and her troublesome ways, but I live for scenes like the one she had Tuesday with Todd. I can’t wait until she actually starts reporting. Jason and Sam’s scenes in the cemetery were so touching, and I am not too proud to admit I was crying some serious tears when she read that poem to him. I almost thought for a minute that she was actually going to leave with him. In reality news, Michael met Trey and had the most honest assessment of him to date. But what are Trey’s true intentions? Like many others, I have a feeling he has serious ties to some people in Port Charles and we are about to find out what they are. What do you think? Be sure to vote in our GH Poll: Trey’s Motives. We also got to see some more of Starr’s singing, and I can’t help but think Johnny is setting himself up for the most emotional fall ever by getting involved with helping her.

On Wednesday, Mac and Felicia went for it during Just A Flicker Of Gratitude. And while I am not exactly feeling the heat between these two yet, it is nice to have a happy couple in town to balance out all of the current and upcoming dysfunction. Of course, the best thing to happen all day was Spinelli finally – finally – telling off Maxie. He really laid it on the table just how self-involved and selfish she has been to him. Maybe living with Patrick and Emma will be good for her, being around a family. Of course, it doesn’t bode well for her future with Matt should sparks fly between these two. In seriously more dramatic news, Kate let Sonny in on what happened the night she stood him up. These two can’t seem to catch a break, no matter the decade. I have really enjoyed Sonny and Kate’s scenes dealing with everything and this one was no different. And while I do not like the bickering between Starr and Trey – it seems forced and is unappealing – I loved Michael letting Trey know what he thought about him. Kristina looks like such an idiot.