On Thursday's How Can I Be Okay, a new alliance was made between Olivia and a hung-over Spinelli. Even in his rough state he could see what a loon Heather was. Had to love her popping up while Olivia was talking about her. She plays the part just perfectly.

And oddly enough, as bad as Spinelli was feeling, he was still having a better morning than his lost love Maxie. You know something's up when you wake up and your husband is gone but his ring remains. Ouch. Her police station plea to him highlighted her utmost commitment to this plan she has set her mind on. Him? Not so much. I get the impression being married to Maxie for life was more than a passing factor in motivating his confession.

Anna and McBain had a bonding moment, and it is clear these two are going to work together to bring down the mob.

I am so glad Anna took the job on Friday's Your Civic Duty. I have enjoyed her return and now she has something really meaty to sink her teeth into. The fact that potential love interest Luke is already in trouble just adds a juicy new layer. He really laid the heat on thick on Friday, what with the hair touching and lingering look at the station. What do you think about these two together? Be sure to vote in our GH Poll: Love for Luke and Anna?

Someone else laying it all out there on Friday was Mac and his exuberant overtures to Felicia. I think he is just on a post firing high and will come down a notch or two soon. I could really take or leave these two, but a happy couple is much-needed right now in Port Charles, and these two could very easily fit the bill.

One of my favorite scenes on Friday was between Anna and Jason. She gave him fair warning that if he crossed the law, she would do everything in her power to bring him down. She was straight-forward and caring and Jason responded better to her than he has to Sam in weeks. Speaking of, he better spit it out to her that he hired those thugs to rough up John before she has to tell him that she knows first. And since that nurse broke all kinds of privacy laws by telling Sam about John's beating, she is quickly closing in.

Meanwhile, puppet master Heather is gloating over the ease at which she has gotten away with, well, everything. And why shouldn't she gloat? She has been incredibly busy, not just last week, but evidently at some point in the past when she switched the DNA results for Sam's baby. But pride always comes before a fall, and I have a feeling Heather is in for a big one. 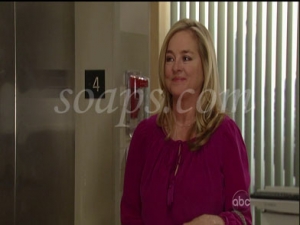 Credit: Back to Llanview. (Soaps.com)

Sam and Téa’s worlds continued to dance around each other last week in the most frustrating way. Each and every moment was so close to revealing the great baby switch. My heart broke for Sam as her baby was taken from her. And my heart broke for Téa too, knowing how much she loves Sam’s baby when we all know he is going to be taken from her – sooner or later. Aside from the high-stakes baby drama going on, Johnny and Carly reconciled, which is sure to be short-lived once his whole mess of a life comes undone.

On Monday’s Think Outside The Box, Sam left her motel room to wander out into the rain with her newborn while Jason apologized to an empty room. Seriously, she couldn’t knock on a few doors or stop at the front desk on her way out. Or get in her car? Frustrating!

Later, Todd and Heather created an unholy alliance when he came upon her disposing of Anthony’s body. If anyone can rival Todd in every way – crazy, manipulative, boastful – Heather can. I can’t say I was unhappy to see these too kibitzing over Anthony’s dead body since I am personally a big fan of Howarth’s Manning. Then again, I watched “OLTL” back when his frat brat character first came on the scene. Many posters, however, have had a hard time connecting with the influx of Llanview residents in Port Charles. Some feel these new-to-town characters are stealing needed screen time from their beloved “GH”-ers. On the other hand, fans of “OLTL” don’t like what is happening to their cherished characters on the new soap. Poster Scrimmage said “So this is what they brought the ‘OLTL”ers to ‘GH’ for? Let’s review. Starr lost her daughter and boyfriend within minutes of coming into town. Then, Starr goes to trial for attempted murder. Welcome to the show. Téa comes to town for Starr’s trial, but misses it, and then her baby dies. Nice to meet you. Todd loses his granddaughter, and then his nephew, but teams up with Heather and becomes a baby stealer – the lowest form of vermin imaginable. Make yourself right at home.”

By Tuesday’s You’ll Never Know The Difference, the swap was complete and Heather was able to get a few digs into an unconscious Sam, who is going to come to wish she had delivered that letter to Steven Lars.

Kate and Sonny had another touching moment at Shadybrook. The fact that she was not really the one to shoot out Anthony’s tires will hopefully be revealed soon. I, for one, would like to see these two have this behind them and move on. I have to say I have been so impressed with actress Kelly Sullivan’s portrayal of the character. Want to hear how she does it? Read our Interview with Kelly Sullivan. Todd got Tea to the hospital and Olivia finally realized that Heather was missing. For someone who needs to be monitored at all times, she has sure been able to cause a lot of havoc, what with all the body stealing and baby swapping she got done.

And finally, Ewan woke up! A little anti-climactic though, since he didn’t really have any news to report that he was holding onto in his unconscious state. Had to laugh when he asked Liz if they could start where they left off

I really thought Todd was going to have a change of heart on Wednesday’s Let’s Be Better after his conversation with Starr about being better people, the kind of people who don’t do things they will regret later. But he has really stepped in it with Heather, and can see how impossible it would be to tell Téa the truth when he saw her holding baby Victor. “I was just beginning to like that you had changed,” raineysmom said about Todd. “Man up and tell Téa the truth! One thing about the truth…Pt always comes out!” And when this whopper comes out, Todd is in serious trouble.

Meanwhile, Matt and Maxie’s wedding night was anything but what she had hoped for. Not only was she denied a gorgeous ceremony, but Matt suddenly, after all this time, remembered everything about the murder. Talk about a mood killer. She probably slept closer to her cellmate in prison than she did to Matt that night.