While she's often found it a relief to play the outrageous Connie, Soaps.com wondered what's it been like going back and forth between the two characters.

"The mirror stuff wasn't as hard as I thought it would be because of the way we filmed it," she admitted. "The hardest part I think thus far would be when Connie was pretending to be Kate in front of Sonny. Because Sonny is very smart and he sees everything, [it had to be subtle]. As opposed to Kate playing Connie in front of Johnny [Brandon Barash] trying to get information out of him. She's not as good at it. It's a challenge, but it's, oh, man, it's the greatest thing. It's so freeing and you can just play. You're just like a little kid in the sandbox."

Now that Kate is finally confronting her alter with professional help, does this mean Connie will soon be no more?

"I was talking to Frank [Valentini, executive producer] a couple of weeks ago," she recounted, "and I said, 'Frank! What have we done? People love Connie.' He goes, 'Yeah, I know.' I said, 'She can't go away. First of all, she's a hoot and I love playing her. Come on. She's kind of like the villain and she's ballsy.' He hasn't said much, but I know the goal of this is to integrate the two. Which also might be a fun thing for me to find moments when Connie can come out. But I really hope they take some time, fine, let her go away, but then I hope they bring her back because I just love it."

What will the future hold once Kate and Connie are integrated? And how will Sonny fit in? Sullivan mused, "Basically with the DID, once the trauma has been accessed. Once they identify what it was that caused the split, or splits plural, once they find that out, the host person is able to, in Kate's case, she can't remember anything. She doesn't know why this is happening. There's a lot of things she can't remember from her past. There's things she can't remember that Connie does. Once they start bringing that out, she's going to become strong again and try to get her life back together. But always the conflict will be Sonny in her life and the violence that he brings in his life. She loves him. He's her one true love, but he comes with huge baggage and huge danger for her. I think it will always prove to be a challenge for them. It will be great stuff to write because you are who you are. He made a deal with the devil and works for the mob and Kate's life is being a successful editor. It's a good question. I don’t know how they're going to fit in each other's lives. I think they're trying. They're trying. God love 'em."

While it remains to be seen what's in store for the tortured couple, the actress teased, "There's a couple of secrets that I know about that will be coming up in the next couple of months. I think it's next week that airs some really great scenes with Kate and Ewen [Nathin Butler], which is going to open up a whole can of worms that they're taking in an interesting way. There's a couple of secrets coming up that are going to be really, very good."

Soaps.com couldn't hide our amusement over Ewen still wanting to work with Kate after getting clocked in the head by Connie. "I know, right?" Sullivan chuckled. "Hysterical. He's like Mother Teresa. I think he feels responsible. You know, those doctors."

The actress also shared that she recently worked with Finola Hughes (Anna), so look for scenes between the ladies coming up. As for who else she'd like to work with moving forward, Sullivan indicated she'd enjoying working with off-screen friend Julie Marie Berman (Lulu) again. While she also has fun sharing screen time with Steve Burton (Jason), who makes her laugh, and would like more scenes with Bradford Anderson (Spinelli), she expressed, "I really love doing scenes with women. There's a lot to gain from them. I just love it."

Read Soaps.com's interview with The Young and the Restless' Lauralee Bell.

Join us on Twitter @soapoperafan and Facebook for more teasers and news about "General Hospital," other soaps, "Dallas," "Glee," "Grey’s Anatomy," "Scruples," "Vampire Diaries," and "Venice the Series!" 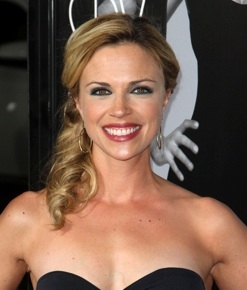 “My boyfriend would say that sometimes Connie comes home.”

Soaps.com recently spoke with Kelly Sullivan, who took over the role of Kate Howard in September 2011. Read on for her thoughts about playing Kate’s alter Connie, Kate’s future with Sonny (Maurice Benard) and what’s next for the emotionally conflicted fashionista.

First of all, with Kate stuck in a mental hospital and her only visible employee Maxie’s (Jen Lilley) recent stint in jail, Soaps.com wondered just who has been running Ms. Howard’s fashion magazine Crimson.

“We know it’s not Sonny,” Sullivan laughed. “That’s a good question. I do not know and I’ve been wondering that myself and wondering why there wasn’t something at least said about it. Maybe she has some international contacts or maybe she has some people that work from home. That’s my prayer.”

Sullivan was recast in the role originated by Megan Ward (“[She] did an amazing job.”) from 2007 – 2010. While Sullivan watched clips of Ward playing the character for background and history purposes, she wasn’t daunted by taking over for another actress.

“For me, I just looked at it as an opportunity to bring my own self into a role and knew it would be different,” she explained. “That’s all you can really do. It’s your version of a character. I took it as a really great challenge. I also became aware early on of the soap fans [laughs]. I don’t think I was really privy to that before. It’s all been a great learning experience. It’s a really fun character.”

When Kate reemerged last fall after a lengthy absence, she had an air of mystery surrounding her. That turned out to be her split personality Connie, but was that always the plan, considering there was a regime change midway through the reveal?

According to Sullivan, when she was offered the role, then head writer Garin Wolf described his vision for Kate, which included another personality that was very dark. However, it wasn’t until current head writer Ron Carlivati came onboard that everything really started happening.

“When Ron got to ‘General Hospital’ there had been so much build up,” Sullivan recalled. “He and I sort of talked about it and he said, ‘So much of the momentum has been put in place regarding the illness.’ He basically said, ‘The train has left the station and I’m going to continue riding it.'”

Carlivati then assured her he had a lot of experience writing about DID, so he knew what he was doing. Something “One Life to Live” fans can attest to.

Once Connie started showing up, Kate was often left devastated and in tears, requiring Sullivan to channel some deep emotion. As for how she handles those scenes, she relayed, “I try not to take it out of the studio lot. When I get in my car and I go home, I try to shake it off and let it go. When I get to work I have my process of getting ready. I sort of sit alone in my dressing room for a while. I think about the given circumstances and you just kind of let your imagination take off. I have a very crazy, colorful imagination so it doesn’t take me long to understand the situation. And if I don’t quite understand it or it’s something that I’ve never experienced or is a little over my head or something, I just talk about it…The challenge for sure is sort of letting it go. Leaving and knowing that’s work, that’s a job. It’s really exhausting sometimes, mentally, emotionally. My boyfriend would say that sometimes Connie comes home. [laughs]”