Paths began to careen together on Thursday's He Needs To Be Eliminated, as Heather took Anthony's body on a late-night car trip and Todd rushed Tea to the hospital to deliver her baby. Both cars got sidetracked in the storm and we were left wondering how horribly this will all play out. Sonny and Jason spent some time working themselves up into a tizzy over John McBain, and when Sonny asked Jason if he was going to just let McBain sniff around his pregnant wife, I had to laugh. Jason is so clueless to his role in all of this it blows my mind. And he is enough of a hot head to really push Sam away.

Finally, on Friday's An Unforeseen Complication, we were treated to a double delivery which sets off signals that a baby switch was in the works. Add the presence of Heather Webber and the odds increased greatly. What do you think will happen? Be sure to vote in our GH Poll: What about the babies? Meanwhile, Jason's boneheaded decision to have some thugs rough up McBain is already biting him in the but since it leaves his baby stranded and in need of medical attention. The best thing to happen all week though was Carly's straight talk to Jason. She made it very clear the only person holding him back from a relationship with Sam was himself. Sure, McBain says it was BS, but coming from her it finally sunk in. He might not really even believe it, but it was enough to push him into action. Let's hope it isn't too little, too late. 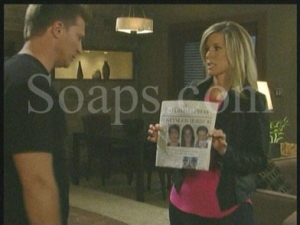 Credit: The things we do for love. (Soaps.com)

Another week, another series of outrageous events that culminated in two babies being born, a body being snatched, a mob-inspired realty show for the Corinthos clan, a courthouse wedding and a major beatdown for John McBain. And this was a short week!

Since Monday’s show was pre-empted for the holiday, let’s roll right into Tuesday’s Your Luminescence Gone Forever. So the big shocker of the day was the quickie wedding of Maxie and Matt in order for her to avoid testimony. Considering she just went to jail for him – and endured harassment and beatings – shows her level of commitment to him. But we haven’t exactly seen the same from him. Meanwhile, you could actually see Spinelli’s heart breaking on screen as he tried to process what had happened. As one of our posters, soapfan1984 said, “Okay, Maxie, you just broke Spinelli’s heart after he had gone through hoops to try and get you released from prison. Can’t you be grateful instead of constantly yelling at him? Then, you go as soon as you get released and get married to Matt just so you don’t have to testify against him?” Equally dramatic as the courtroom scene was Kristina’s return to the Davis-Corinthos fold, complete with camera crew. Mad at dad for pulling strings to get her into Yale, she was in full-on spoiled brat mode as she tried to blackmail her entire family into agreeing to film or never see her again. Uh, for me this would have been a no-brainer and I would be saying bye-bye to her. We’ll see how far “Mob Princess” actually goes.

On Wednesday’s I Don’t Think I Like You, Tracy and Luke were left holding the gun, literally, as the cops closed in on the boathouse. And now, without a body, the pair is left in limbo wondering what is going to happen. Seeing these two work together has been great to watch. Their rapport is hilarious and I for one would love to see more Spanky and Luke hijinks in the future. Jason also decided it was time to confront McBain about all of the ways he was messing in his life. None of it is true of course, but Jason can’t seem to blame himself for any of his current problems with Sam, despite the fact he has walked away from her for weeks now. McBain said what everyone has been thinking, finally, that if Jason is losing Sam it is because of Jason.