Thursday's A Cadaver We Have To Stash was so funny I had to watch it twice. Spanky and Luke were in their element as they successfully - at least for a bit - managed to hide Anthony's body in plain sight by propping him up with some ice tea and an issue of Crimson. Genius. Over at Kelly's things got dicey between Heather and Sam, and I am not sure why Sam just doesn't tell Steve what his mom is up to. Meanwhile, Carly opened the door to a possibility of a reconciliation with Johnny, but I can't help but think he's totally blown it with the fact he is the one who shot Anthony's tires. Not only did it result in the deaths of two innocent people, but she sat in the stand and told the world he couldn't have done it because they were in bed together. Oh, and he convinced a mentally ill woman to take the fall and just shot his grandfather. He might as well say goodbye to Carly for good.

Friday's episode, A Bit Of A Francophile, had some resolutions but introduced plenty of questions like a good Friday episode should. Anthony still produced some laughs by snubbing Heather and Monica. Loved it. But Sam and Jason were hit by another blow. Right after Jason tells Sam, yet again, that he can't love the baby a reporter shows up to show them their whole sordid story is front page news the next day. Not sure why the reporter did not get in touch with them before the story printed to get their comments, not after, but I guess that is nitpicking. Jason was finally arrested for Franco's murder which I am sure has to do with the mayor's beef with unsolved cases. Orders may have even come from Anna since we have not heard from her since the job was offered. And finally McBain told Jason the real reason he was in Port Charles, and it has nothing to do with Sam and everything to do with Sonny. But will McBain really find the answers he is looking for? Be sure to vote in our poll, Will John McBain get justice? 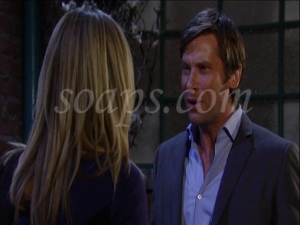 The hits just kept coming in Port Charles! With a few different storylines simmering, each day brings a revelation, big and small. And ─ for the most part ─ the characters have been true to themselves and compelling to watch. Sonny and Todd’s weeklong barb-fest was a highlight, as was Kate’s emotional reckoning with Connie and Sonny. But the topper of the week, without a doubt, was the Weekend at Bernie’s hijinks with Spanky and Luke. Last week gave us tears, laughter and true character connections ─ everything we long for in Daytime.

On Monday’s The Whole Story From The Beginning, it was all about emotional reckonings. First, Sonny no longer has any doubts about Kate’s alter Connie, and his interrogation room scene with first Connie, then Kate, was as good as it gets. I could feel their connection and was glad Sonny – who suffers a mental illness himself – didn’t hold out his compassion any longer. Sam also told Molly about her rape in Hawaii, which was painful for both of them. And after a chat with Shawn, Carly started to open herself up to the possibility forgiving Johnny, but I’m pretty sure this will only get her hurt again since Johnny shot Anthony at the end of the episode. Soon enough that bracelet might be all she has left to remember their time together. Good thing she fished it out of the trash.

Tuesday’s I Bet You Weren’t Expecting That, Were You had some ups and downs. Patrick’s bedroom conversation with Emma was reassuring, but with Matt’s problems about to explode, I hope he can continue to hold it together. At the hospital, Jason continues to be more than off-putting when it comes to Sam and the baby. He has no problems letting Liz know everything that is going on, hugs included, but can only manage to tells Sam he can’t imagine not seeing Franco in the baby and maybe the should give the baby up for adoption. What? Tea and John’s interaction was cute and furthered the idea that things could happen between him and Sam. The best part of the the day was watching Carly and Todd spar outside Shawn’s. His dry humor aggravated her but also lightened the mood. They went from him threatening her son to sharing fries seamlessly. I am excited to see how he helps her get over Johnny.

During Wednesday’s A Mutually Beneficial Arrangement, a few residents of Port Charles were in for a big surprise. For Tracy, it was finding Anthony’s dead body in the boat house. For Mac, it was getting canned from his job. For Matt, it was finding out Maxie signed the papers after her jailhouse makeover. The biggest surprise on Wednesday was probably the mayor’s offer of the police commissioner’s job to Anna. She had just been complaining to Luke about being bored and, jokingly, how Emma isn’t the kind of kid who needs her grandma when we had just seen weeks of Ethan pawning her off on Elizabeth. Of course it will make things tricky for Luke since she over heard him and Tracy whispering about Anthony today as well. Trouble for the roommates is definitely ahead.