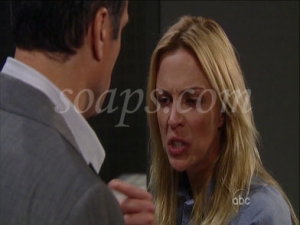 Last week ended with two people confessing to shooting out Anthony Zacchara’s tires: Connie and Johnny. And while Johnny was in bed with Carly at the time, he certainly had the motive and the means to have someone pull the trigger for him. But he could also just be trying to get a dig in at Anthony by telling him he did it. As for Connie, who knows what she was up to that night? She could be telling the truth, but she has just as much motive to lie to Sonny to make him believe she did it as she did actually doing it. Of course, they could both be lying and the real shooter is still keeping quiet.

Who do you think pulled the trigger? Vote below and check out the latest General Hospital Weekly Blog.