On Thursday's Surprise! The Truth Sucks, Todd and Tea fell right back into old habits from "OLTL." He came to her with his plan to get Sonny and Michael to back off of Starr, but she didn't exactly take the news as good as he hoped. In fact, her emotional outburst was so true to how a very pregnant woman might act in that situation I just had to laugh. Meanwhile, Tracy's fantasies about offing Anthony were so hilarious as well. When Luke tackled her to the ground, it was like old times with these two and I can't wait to see what they cook up for Anthony.

We also learned that Dr. Keenan made it out of surgery, thanks to an on-the-mend Patrick. Too bad his world is about to fall apart again when he learns his brother is Lisa's true killer. But the true treat of this episode was watching Sonny realize Kate is a true victim in all of this. As he watched her confront Connie through the glass, it really hit home why Sonny is so beloved on "GH." Watching the mobster melt with love and empathy was the only way we wanted to see him come around. Looking forward to seeing the sparks fly between Sonny and Connie in the weeks to come! 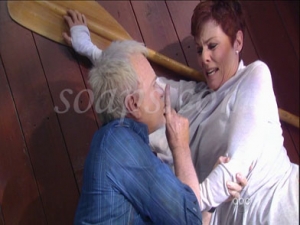 Credit: Man behind the mirror. (Soaps.com)

While the pace slowed down a bit in Port Charles last week, it certainly did not mean things weren’t getting done. In fact, as the dust settles after all of the action of the past few weeks (Starr holding Sonny at gunpoint, LuLu and Sam’s kidnapping, Kate and Carly’s cat fight) more and more is being revealed about what happened the night Cole and Hope died. Relationships seem to hang in a delicate balance as this all gets sorted out and it has been delicious to watch.

Nothing can make a situation spin out of control faster than some good old fashioned eavesdropping. And when Todd heard what he thought was KateCon’s confession to shooting Anthony’s tires on Monday’s Picture Of Domestic Bliss episode, he knew he had all the ammunition he needed to start strong arming Starr out of trouble. First, he filled in a shocked Carly, who took sides with Todd pretty quick when she got into it with his ex Tea. Pretty ballsy defending the man who killed the father of an expectant mom’s baby. We’ll see how Carly feels when Todd tries to pressure her son into following his plan. This episode also hinted at possible romantic shakeups as Luke and Anna shared a moment and McBain and Sam spent more time together.

It has been awhile since we have caught up with TJ and Molly, since the party fiasco really, so a lot of Tuesday’s Good Luck With That episode was devoted to their burgeoning relationship behind Alexis’ back. Poor Michael is now caught in the middle of Molly’s deception after he caught her in a lie, but it’s hard to think this will ever really come back to bite him in the butt. Especially since he has some serious problems to deal with. He comes face-to-face with one of his more pressing matters when he tells Carly he is the witness against Starr, and Todd, who is really honing his eavesdropping skills this week, overhears. Looks like Carly is going to have to choose sides fast. Of course, she has her own demons to deal with first, namely Johnny and his persistence in getting her back. The bracelet he gave her at Metro Court was proof that he listens to and cares about her. We’ll see if she buys it or not.

Sonny, who was absolutely stone-hearted after finding Kate in bed with Johnny, is starting to be swayed that something other than sex was in the air after so many people have hit it home to him that Kate has another identity. Of course it wasn’t close confidants Jason or Alexis who finally got through to him, but enemies Johnny and Todd in Wednesday’s He Was Selling It Big Time. The scenes between Sonny and Todd were hilarious as these two alpha-males sniffed around each other, sparring with words and wit. Plus, things finally moved forward with Maxie’s imprisonment over Lisa’s death. Everyone knew after Spinelli spilled the beans in the courtroom that Matt was the true killer. Even Matt knew once Maxie filled him in on what really happened that night. Getting her out of jail, despite her beating by the other prisoners and photos of the real murder taking place, won’t happen unless she tells the court herself Matt is guilty. I think we are getting there, but it has been baby steps for sure.