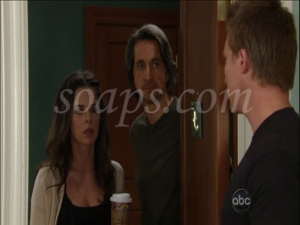 There was no rest for the wicked on “GH” last week. McBain killed Ronnie in a casino kidnapping caper – after it was revealed he was the real shooter that set in motion Cole and Hope’s death. Meanwhile, footage was found of Lisa’s murder that incriminated Matt but saved Maxie. Maggie flat lined at General Hospital, not surprising since there are so few doctors left to save lives. At least Steve was able to step in after his release. Finally, Tea and Todd left Llanview for Port Charles and caused sparks the minute they got to town, so this should be interesting.

Special moments keep piling up for Sam and John McBain. Obviously we know there is a connection since they keep finding themselves together all the time. But when he saved her life from Ronnie, it added a whole new dimension on their relationship. And it’s one Jason will not be able to ignore. Of course, he was been busy tracking down Kate and found her at the airport. Loved the lady who told her she had been arguing pretty loudly with herself. Actress Kelly Sullivan (Kate) has been bringing such dimension to one of the oldest plot lines in Daytime. Funny, sad, emotional and overall gripping, KateCon has been riveting to watch. During Starr’s reign of terror, she brought the gun back to Johnny before Michael had her arrested. I have to say I was surprised by that turn of events, in a very good way.

The scenes between Anna and Liz in the hospital were really touching. Watching two mothers grieve about their lost children could have been a little morose, but these two were subtle and believable in their grief, one who has had to live through it and the other just getting used to her daughter being gone. Good stuff. Watching Kate begging Sonny to at least listen to her explain about Connie was frustrating, in that Sonny was so self righteous about it all. I get that he is angry, but it was hard not to feel sorry for her. Michael and Starr got into it at the station, and while Michael seemed to have feelings for her, I am left wondering why. She is so bristly to him and, oh yeah, she tried to kill his dad. Meanwhile, Jason arrived at the casino just in time to see Sam and McBain hugging it out after the shooting. And instead of putting his ego in check, Jason let Sam go to the hospital by herself so he could get in a pissing contest with McBain. When he made it back to the hospital it was Liz he saw and when she reminded him it would have been their son’s fifth birthday, he wisely went to the cemetery with her. In fact, the two of them wondering what kind of present they might have bought for him was sad and real.

Wednesday – Not Innocent. Just Not Guilty.

Todd is back, and that makes me happy. He is just so deadpan funny and is sure to bring just the right amount of comic relief to cut through all the drama that is sure to erupt. One truly hard to watch moment? Alexis from “The Real Housewives of Orange County” reading the news that Ronnie was killed on the TV news. All I could think about was the fact she had the words in front of her and still could not get them out well. At least she inadvertently got Spinelli the evidence he needed to get Maxie out of jail when she spoke about the footage of Ronnie’s crime at the casino. The scene between Mac and Felicia was a throwaway, and so far, her return just seems a bit forced. We’ll see.

The beat down on Johnny continued as Carly threw the flowers he brought her right back in his face. I think he deserves everything Carly has to dish out, and then some. Like she so eloquently put when she asked him why he couldn't have just pretended to have sex with Kate instead of actually doing it, "Mo Muss, no fuss, no penetration." All of his begging is leading me to believe that she may actually give him another chance. What do you think? Answer our Johnny Begs For Forgiveness poll. Meanwhile, Matt and Patrick played the blues brothers as they wallowed a bit in their lives. Too bad this is probably going to be the best part of Matt's day since he got to look at the footage of himself committing a murder later in the day.

Friday - Crank Up The Heat.

It didn't take long for Todd to find some trouble to get into. After Carly convinced him to help Starr no matter what, he heard Kate confess to Alexis that she could have been the one who shot out Anthony's tires. Of course, we know that isn't true, but we can only imagine what Todd is going to do with that interesting tidbit. Meanwhile, Johnny tried to threaten Delores into losing his gun. He seems genuinely concerned about Starr, but not sure why just yet. We also found out Maggie lived through Heather's poisoning, only to die on the table while Steve furiously worked on her. Heather, in an effort to save her son, has only created a situation where he will feel guilty about Maggie's death for the rest of his life. Happy Mother's Day!