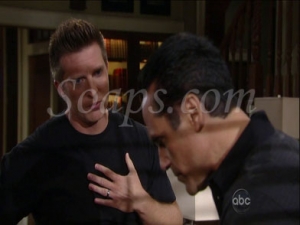 Jason and Sonny share a close relationship and always have. But does that give Jason the right to tell him about Sami’s rape by Franco? One could say it isn’t his place to share the news. But you could also argue that it happened to him too and he now has to deal with the aftereffects of that rape.

What do you think? Vote below and check out the latest General Hospital Weekly Blog.