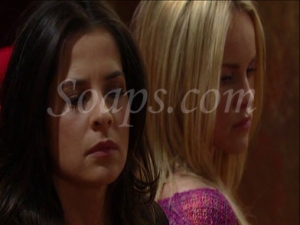 I’m sure many of our posters have noticed that someone new was doing the recaps this week. That’s me, Hollie, and I couldn’t imagine a better week to take the reins from Lori. There was a lot of gun-waving, a split-personality cat fight, and even a couple of kidnappings. Let’s go through this day-by-day so we don’t miss a single, hair-whipping moment.

On Monday’s show, I Will Rip Your Heart Out, Maxie was sentenced to 20 years despite Spinelli trying his hardest to spill the beans. Too bad his deep love for her caused him to clam up. Really? Elizabeth finally found Dr. Keenan knocked out on the floor of his office, Maggie found the bloody paperweight, but neither one called the cops, even after Ewan gave up Connie’s name. I guess it was a good thing the PCPD weren’t called anyway, because Ronnie and Dante were too busy accusing each other of beating strippers and they can really only handle one crime at a time. Best moment hands down? Connie offering Olivia a dollar when she asked for money. She is so much fun!

On Tuesday’s show, I’m The One Who Should Be Committed, Sam and Carly shared a girlfriend moment, albeit a pretty tame one. Small steps I guess. At least Jason is starting to put together pieces of the Connie/Kate puzzle as he commiserates with Sonny. He even spilled the beans about Sam’s rape. A lot of posters don’t think this is his story to tell, but I think sharing this with Sonny is a testament to the strength of their relationship. Let us know what you think and vote in Soap.com’s General Hospital Poll: Jason Spills The Beans.

Meanwhile, Heather drugged Maggie and she is probably dead. Of course we don’t know since this is the last we heard about it all week.

Things really picked up steam during Wednesday's Mom's Gonna Kill Her. Elizabeth and Olivia started to realize Kate could have been the attacker, yet still no cops. And really, doctors are dropping like flies around GH, so isn't someone going to wonder where Maggie is? I am assuming she has to work tons of shifts to cover everyone else who is gone. Meanwhile, this was the day of the big cat fight between Carly and Connie, and I thought it was totally awesome from the moment Carly shoved Connie in the back until Connie mouthed the word "bitch" after it was all over. Starr went over to Johnny's sounding like a broken record, but sneaked out with his gun. Some readers wondered if he set it up that way, but Johnny seemed genuinely surprised the gun was gone. Meanwhile, McBain wiretapped Sonny's house in order to get the goods on his sister's death, but not sure he is going to get the answers he is looking for. It does seem that his connection with Sam, however, is just beginning.

On Thursday during Little Girl Detective, it was all about some pistol waving. Sam and McBain ended up in the same cheap motel as Ronnie and LuLu, and despite there being no rooms left when Sam checked in, they all ended up right next to each other. Pretty convenient. Dante got Delores to bust him out, just in time for him to team up with McBain on the hunt for LuLu. Starr waved a gun around at Sonny and forced him out of his house while his enemy Johnny couldn't catch a break either. Carly showed up to knee him in the groin and I can't say he didn't deserve it.

On Friday, the cliffhanger episode This Is For My Mother, brought every storyline to a head. Micheal, after punching Johnny in the face, found out Starr took his gun and after running to Sonny's and watching the tape was able to figure out that she took him to the scene of the accident. Not sure I would have made that connection as quickly, but good for him. Meanwhile, Jason found Connie at the airport and Dante and McBain found the girls at the Haunted Star Casino. Of course, all the action stopped there because it couldn't be a cliffhanger if we were left with nothing more than some drawn weapons and shocked faces.

I hope this week is just as exciting and can't wait to hear your thoughts on each episode every day.