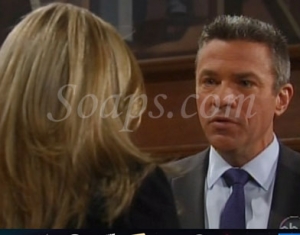 Last week, some secrets came out, mysteries were solved and another Port Charles favorite came home. Let’s get right to it and break it all down.

Ronnie collects.
It seems Lulu was right and Ronnie is the stripper stalker. Making him an out and out bad guy is sort of disappointing, considering he could have been more interesting all along. His long history with the Falconeri clan could have been mined, pitting them against each other or making them true allies. His sketchy police work could have also been utilized more as we have seen and heard about his doing bad for the perceived good, in his mind anyway. However, his potential to be an intriguing shades of grey persona has always been bogged down by repetitive dialogue about taking Sonny down and questioning Dante’s loyalty. That leaves Ronnie now sadly reduced to a woman hating stripper stalker. The most interesting thing about this storyline is that, thanks to Luke, Dante is already suspicious of Ronnie, who kidnapped Lulu. Usually it takes months for the Port Charles PD to figure anything out.

Maxie saw him do it.
Another long awaited crime was finally addressed, as Maxie admitted to Spinelli she saw Matt kill Lisa. That means, as part of her self-punishment, Maxie is taking the blame for her sort of boyfriend. No one really seems to care anymore who killed Lisa, so it will probably be okay if Matt isn’t punished for the crime. Although, Maxie does need to be cleared of the charges before the law gets around to Dr. Hunter. It will be interesting to see if he confesses to save Maxie when he remembers or if Spinelli is the one to out Matt in order to protect his Maximista.

All he has left.
Speaking of Maxie, her scenes with Mac outside the courtroom were a highlight of the week. Her self-absorbed whining may have become tiresome, but Mac's devastation over losing Georgie and Robin, and now facing his last living daughter Maxie going to prison has been heartbreaking. He was a willing and loving father to Georgie, Maxie and Robin when their biological dads couldn't, or wouldn't, be there for them, which we were nicely reminded of courtesy of his touching walk down memory lane with Anna. Now, Felicia's back, which will probably add more weight to Mac's heavy heart. Let's just hope her presence will give him more screen time, paving the way for more touching performances.

Losing himself.
Not only was Mac in need of a hug last week, but Patrick finally graced the screen again to show viewers how hard Robin's death has hit him. He's been dodging work, pushing Emma away and basically hiding from the world by burying his head in the couch pillows. Not that Patrick should wallow forever, but it's kind of refreshing to watch a character grieve the love of their life instead of bouncing back weeks later. Robin opened his heart and changed his life, he should be in deep despair. Not to mention, Patrick looks good with scruff. It was great to see Matt stop by to support his brother as well, which should happen more often. Now, all we need to see is Patrick grieving with Anna and Mac.

Burning questions.
Does Jason really have room to be mad at Sam for confiding in McBain when he told all to Elizabeth? Not to mention, after all Sam has been through, shouldn't he cut her a little slack?

Is there any woman Sonny has been with he hasn't called a whore? And is this character trait supposed to endear women to the show's leading man?

Are we supposed to feel Carly's heartbreak, rage, or whatever she is feeling, after Johnny cheated on her? They've been together five minutes. They can't seriously expect us to believe these two have a deep connection. Aren't they more like a blip on each other's radar?

By having Johnny sell human organs on the black market and sleep with a mentally disturbed woman, are they trying to make viewers hate the once charming and harmless mob prince? Has your opinion of him changed? Vote in Soaps.com's General Hospital Poll: Johnny's Latest Stunts.

Wouldn't it be wise for Olivia to ask her son to appoint 24-hour police protection for her after slapping the baby-selling, drug inducing, murdering Heather Webber?

This is my last "General Hospital" Weekly Blog, as Hollie Deese will be taking over the recaps and blog starting May 1. You will be able to find me writing the "GH" news at Soaps.com sister site Soap Opera Fan Blog. As I've enjoyed sharing my thoughts and hearing yours as well, I will also continue to dish all things Port Charles on Twitter @LoriKWilson, so if you're not already, follow me there.