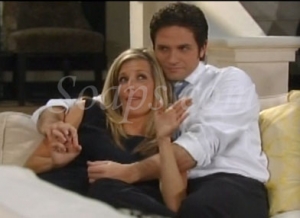 ABC soap fans got a double dose of good news last week: “General Hospital” has been renewed and “One Life to Live’s” Florencia Lozano is making her way to Port Charles as fan favorite Tea Delgado. While we wait to see what exactly the future, which is definitely looking brighter, holds, let’s break down what happened last week.

Not feeling it.
No to Luke and Anna. No to Carly and Johnny. A great friendship and a fun, flirty hook up shouldn’t be ruined by taking things to the next level. A Luke and Anna romance is only being teased at the moment and hopefully it won’t go any further. Luke needs to return to his Spanky Buns and just rely on Anna for her amazing friendship. As for Carly and Johnny, it’s awkward and weird for them to act like a real couple. Their spark faded the moment they went public, so they should go back to sneaking around and engaging in sexy banter.

Out of left field.
Another couple that doesn’t feel right is Matt and Maxie. While separated by a jail cell, Matt decided he was in love with his still self-obsessed ex-girlfriend. Wasn’t he just mooning over Elizabeth? That seems to have passed, because he apparently didn’t know what he had in Maxie until she was almost gone. It’s not clear what he has been missing about their failed relationship, making his sudden declarations of love feel hollow.

Take two aspirin and call me in the morning.
Kate thinks it’s a better idea to take a couple of Tylenol to get Connie under control rather than follow her therapist’s advice and commit herself. The latter seems like the best plan for several reasons. One, Kate needs help STAT and a couple of aspirin ain’t the cure. Two, it might help her mental state to find out if she is or isn’t guilty of shooting at Anthony, thereby causing the deaths of Cole and Hope. Three, a record of mental instability would give her a good defense if she is in fact guilty. Four, watching Kate try and battle Connie is losing its appeal.

What's the plan?
As for Kate's doc, they recently cast suspicion on Ewen regarding Lisa, teased a possible connection to Jax, lamely revealed him to be Elizabeth's savior and brought him in to consult on the stripper case. However, none of these story points have gone anywhere. Ewen's nice to look at and has an easy rapport with those he's interacted with, but he doesn't seem to have a place in the grand scheme of things. He's been on long enough. They need to do something more definitive with him. A link to Jax and/or Jerry was fun to think about because the return of either Jacks brother would be welcomed.

Resurfaced.
Maggie is on her way out, so her lack of screen time seemed like "GH's" favorite way to usher the character off the show. However, she made an appearance last week when she randomly showed up wondering why Steve had been ignoring her. Twitter friend "Dianne K" speculated, "There has to be a reason for Maggie in all these scenes with Steve regarding Heather. Have a feeling that is how she exits - Heather." Do you agree? Will Maggie leave the show because Heather kills her?

Villainous return.
Speaking of Heather, whether not-so-subtly threatening Anna, Sam or Olivia, her diabolical presence is entertaining, yet believable. She may be a little over the top, but unlike Helena, who has become cartoonish, and Franco, who was always hard to take seriously, she's a little more grounded in reality, therefore, a more viable villain. And her love of Franco makes her interactions with Sam comical in a creepy sort of way.

Why can't we get Matt helping his grieving brother Patrick instead of watching him bang his head against the wall several times a week trying to get through to Maxie?

Was Milo manhandling John McBain the most effective he has ever been as Sonny's bodyguard?

Yes, she's been around a few shady characters in her day, her father Todd being one of them, but shouldn't teenager (twenty-year-old?) Starr be just a tiny bit afraid of going up against a notorious and lethal (in theory anyway) mobster?

Dr. Lee didn't even flinch when Sam told her Franco was Jason's brother and could be the father of her baby. Was that the height of professionalism or does Kelly have no idea who Franco is?

Who is the father of Sam's baby? Tell us who you think it is in Soaps.com's General Hospital Poll: Who's The Daddy?

That's all I got this time around. What did you think of last week's "General Hospital?" Feel free to share your thoughts and own burning questions below.