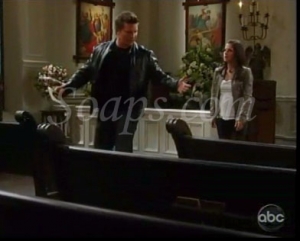 With the exception of Maxie’s and Starr’s histrionics, it was another great week in Port Charles. The rants are definitely far and few between lately, which makes it exciting to be a fan of “General Hospital,” but difficult to come up with different ways to express all the raves. There are definitely worse problems to have as a soap viewer, so let’s break it all down.

Guilty conscience.
In her grief and guilt over Robin’s death, Maxie declared she killed Lisa Niles in order to get Mac to arrest her. Her tactic worked, even if no one believed her. It remains to be seen if she really did the crime, but one possibility is she knows who did kill the devious doc – perhaps Robin – and she’s trying to protect them (Robin’s good name?) by taking the blame. What do you think? Did Maxie kill Lisa?

A family comes together.
Noah came home to Port Charles to console his son Patrick. They shared some nice scenes, but perhaps the more interesting, albeit brief, interaction was between Noah and his other son Matt. It was indicated that Matt called his pop for Patrick’s sake, but it was clear there was still a lot of animosity between Dr. Hunter and his absentee father. Hopefully, they’ll explore that dynamic a little more in-depth.

A couple divided.
Jason ultimately forgave Sam for keeping the secret about Robin’s death, but not before getting in some pretty hurtful comments to his wife. He actually inferred that Carly knew him better than she did. Is there anything that could sting Sam more? It was actually kind of nice to see the two at odds. Despite them battling Franco and Jason’s health issues, they’ve been pretty lovey-dovey of late. Witnessing Jason explode at his wife felt like one of the more realistic reactions he’s had in recent memory. They shouldn’t break up over it, but having the Morgans disagree and argue over certain things is human and relatable.

The power of friendship.
Luke was there for Anna, as she grieved the tragic loss of her daughter Robin, but things turned around last week when Anna supported Luke over Jake's death. The scenes between the old friends have been so real, honest and heartfelt. They've actually made Luke sympathetic and a real redemption seem possible. Hopefully, they won't go down a romantic path because right now, watching them as friends is immensely satisfying. What do you think? Vote in our Anna and Luke Poll.

He's back.
John McBain returned to Port Charles and quickly proved he's a great fit. He's gunning for Sonny, called Dante out about his father and sparked with Sam. He seems to be the only cop who could actually take down Sonny. Not that anyone really wants him to, but it's nice to feel like there's a competent cop around. As for Sam, her sensing she had seen him before was a fun callback to the actors' "Port Charles" days (could there be more to it?), but nothing was more entertaining than McBain's visit to the Quartermaine mansion. Between flustering Alice and calling Tracy a mob wife, John proved Llanview denizens aren't the only ones he smolders with.

Burning questions.
Has Luke ever concocted a more convoluted, ill-conceived plan than making everyone think Ethan is Robert's son?

Speaking of Robert, unless he comes back to Port Charles soon – worst/most useless return ever?

Did Helena disappear into the ether with Holly or are the women still lurking around Port Charles?

Jason genuinely seemed worried for Spinelli and even sincerely offered to help him when he was distracted by thoughts of Maxie. Was Jason's exasperated gene removed during surgery?

Jason had brain surgery to blame it on. What's Anthony's excuse for feeling so magnanimous towards Johnny that he turned himself into the police?

When Sonny was telling Michael that Todd had no code and felt a sense of entitlement, was he really talking about himself?

Did anyone else want to see Anna drown her sorrows in Coleman?

Aside from continuing to love the quietly emotional scenes between Patrick and Anna, that's all I got this time around. What did you think of last week's "General Hospital?" Feel free to share your thoughts and own burning questions below.