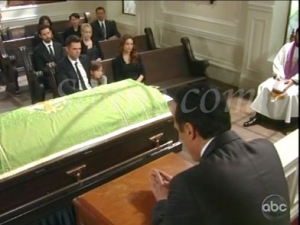 Last week’s “General Hospital” was a spectacular display of soapy goodness. From the exciting action of the Mannings and McBain in Port Charles to the heartbreak of Robin’s funeral, just about every minute was filled with top-notch drama. It’s nice for “General Hospital” to be must see TV again, so let’s break it all down.

Mesmerizing mourning.
With the exception of Maxie’s characteristically selfish meltdown, Robert’s letter ringing a bit hollow and a few people missing in attendance, Robin’s funeral was a wonderfully realistic sendoff for the beloved character. There were no histrionics (obviously, save for Maxie). It was just the people who loved Robin quietly grieving, making every interaction feel real in a medium where the acting is often seen, not felt, and certain beats can be overlooked. Subdued, holding back of tears is often more emotionally gut wrenching for viewers than full on sobbing. Patrick and Anna in particular did a wonderful job of this, thereby pulling the viewers in, making them feel their pain. Who made you cry the most last week? Tell us in our General Hospital Poll: Who Brought The Tears?

Not only did the performances ring true, but a couple of small details added to the realism. Gone was the usual actor’s headshot often seen at a soap opera memorial. Instead, a lovely candid photo of Robin was seen in its place. You know, like real people have at real funerals. It was also a nice touch for a video loop of, again, candid shots of Robin playing during the proceedings. Not only was the video another realistic touch, but viewers watched Liz and Matt put it together. It’s beats like these that make soap operas feel far more natural.

Llanview in Port Charles.
The Mannings mixing it up in Port Charles last week was truly exciting. The main action centered around Todd going up against fellow powerhouse Sonny Corinthos, which was nicely offset by their female counterparts Carly and Blair bonding over the hotheaded men. After the incredible energy of those scenes, John McBain sailed in to take Todd back to jail and teased the audience with his past with Sonny. It's not often a crossover feels so seamless, but last week proved that when the soap opera stars align, brilliance can be had. As for Starr, Michael certainly needs someone his age to play off, but her impending return isn't as thrilling to think about as Todd and McBain's. Now all we need is Blair to follow suit.

Exception to the rule.
While everything else was firing on all cylinders, Steve finally confessing all to Olivia was the lone fast forward moment. The only good that can come from this storyline is Olivia interacting with Johnny, who inexplicably knows about Steve playing God, in order to get him off Steve's back. Since the two have off the charts chemistry and Johnny is hitting it out of the park with every Port Charles lady lately, it's probably best the storyline goes in that direction. However, now that Cassandra is gone, Steve's arc has taken over as the momentum killer in an otherwise exceptionally entertaining "General Hospital."

Burning questions.
If they took the time to show viewers Lulu calling Lucky about Robin, why can't we see someone call Brenda? She might like to know her best friend is dead.

Does Ewen know what happened to his patient Cassandra, who he seemed creepily obsessed with?

Speaking of Ewen, what was with the weirdness of him dropping trou in front of Sam?

Kate's reaction coming to the forefront as Johnny mounted Connie on her desk was riveting, as was Johnny's unsettled confusion as to how to respond, but the question remains, what made Kate/Connie split in the first place?

Did dutiful wife Sam change an unconscious Jason into his signature black t-shirt and jeans, or did the hospital staff know there'd be hell to pay if Stone Cold woke up in an emasculating hospital gown?

Aside from cheering Carly on as she finally made her way to Jason and loving the beautifully shot scenes of Patrick feeling Robin in his every move, that's all I got this time around. What did you think of last week's "General Hospital?" Feel free to share your thoughts and pose your own burning questions below.