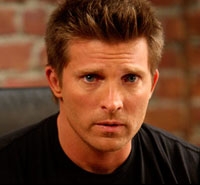 “General Hospital” fans in the Chicago area who are interested in checking out The Beer Market should head out there for their opening tonight. Steve Burton tweeted he’ll be there at 8:00 PM for an open ended amount of time. The Beer Market is located at 1270 S. Milwaukee Ave in Vernon Hills, IL. Stop in and say hello!

In an interview with Illinois’ Vernon Hills Review, Steve Burton (Jason) and Bradford Anderson (Spinelli) revealed they have entered into a new business venture together. The on and off screen pals are now part owners of a bar called The Beer Market.

The bar will feature high-quality craft beer, seasonal wines and live entertainment. It is located at the corner of Milwaukee Avenue and Route 45 in Vernon Hills, Illinois, a city where Anderson and Burton have often played with their band Port Chuck and made other fan appearances.

The actors became involved after Burton’s friend Greg Goodrich, a principal partner in the bar, approached him about investing. The Beer Market will have a soft opening on March 27 and official grand opening in April.

Find out where you can see Anderson and other “General Hospital” stars at the Fall Getaway Weekend.