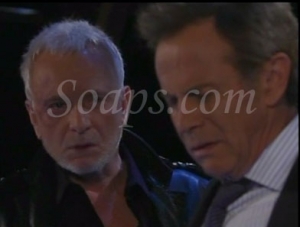 The lighter side of Kate. (Soaps.com)

Aside from not seeing Patrick at all last week and feeling a bit let down by Robert’s return, “General Hospital” continued to deliver strong episodes. Let’s break it down.

Disappointed.
As great as it was to have Robert back, it didn’t really ring true that he would want to kill himself upon learning of Robin’s death. It was also a bummer that he didn’t share any quality scenes with his daughter while she was still alive. Now, he’s taken off in search of his “son” Ethan, who he believes needs saving from Helena, who Ethan wanted to go after in the first place. Even though it’s all very convoluted, Robert wanting to take action is understandable, since he feels he failed Robin. However, it would be preferable to watch him stick around to grieve with Anna, Mac, Patrick and Emma. Here’s hoping, he’ll return for the funeral.

Comings & goings.
Cassandra was recently killed and Maggie is on her way out. Getting rid of these characters were wise decisions considering they didn’t exactly set the canvas on fire. The arrival of “One Life to Live” characters has reinforced how dull their storylines were (are), as the energy and intensity in the Mannings’ scenes are far more palpable. Starr, Todd and Blair are established characters (albeit from another soap) viewers care about. They came on the scene as part of an established Port Charles storyline – Sonny and Anthony’s mob war. Now, Starr is connected to Michael, who tried, but failed to save her family and is the son of the man suspected of causing Hope and Cole’s deaths. Then there’s Todd, who wants revenge on Sonny and is just one more in a long line of characters who has chemistry with Carly. This week, we’ll see Carly and Blair interact, which should be riveting as the women have tons in common: They used to be major manipulators (Carly still kind of is), who are now mama bears protecting their cubs and are forever connected to the bad boys in their lives. “General Hospital” shouldn’t become “One Life to Live” the sequel, but having a little bit of Llanview seamlessly live on in Port Charles is far better than trying to make viewers care about uninteresting newbies. What do you think? Vote in our General Hospital Poll: The Mannings in Port Charles.

Connie from the block.
Does anyone else prefer Connie to Kate? She has a better sense of humor, talks and dresses fantastically trashier and has mad chemistry with Johnny. She's making this split personality story far more interesting than first imagined. Then there's Johnny's part in all this. It's nice to see his conscience shine through by not wanting to take advantage of Kate/Connie, as well as being concerned about how his sleeping with her would affect his current bed buddy Carly. The best part though was his hilarious musings about how he'd get a hold of her. Does Connie have her own phone line? Should he just hope Connie picks up when he calls Kate's phone? They're actually all good questions since there is no instruction manual on how to navigate spilt personalities.

Burning questions.
Will Jason ever wake up to discover people are keeping secrets from him?

The stripper case seems like an afterthought at this point, but watching Dante and Lulu work on a mystery together could be fun. Do they have what it takes to be this generation's Luke & Laura, Anna & Robert or Felicia & Frisco?

Steve finally confessed the truth to Olivia. Can we put this lame story to bed now?

With Maggie and Cassandra going or gone, should fellow newbie Ewen follow suit? Or does he have potential?

Where have Shawn and TJ been? More importantly, is Molly still hungover from the party?

That's all I got this time around. What did you think of last week's "General Hospital?" Feel free to answer the above questions and pose any of your own in the comments below.