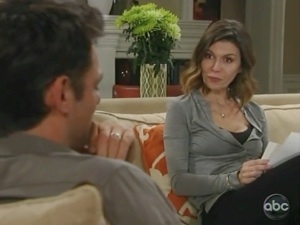 “General Hospital” continued to impress with realistically heartbreaking scenes in the aftermath of Robin’s death. Viewers were also treated to two more fan favorite returns and the arrival of another transplant from Llanview. A couple of other things happened as well, so let’s break it down.

More fallout.
There were so many great scenes last week as news of Robin’s death continued to spread across the canvas. Patrick and Anna have been the most impressive to watch, as their reactions have been so real with the histrionics kept to a bare minimum. Honorable mentions must go to Epiphany during her pep talk to Patrick and Spinelli in his quiet pain and support as he broke the news to Maxie. The simple scenes between Sam and Sonny at the hospital and Luke and Anna at Kelly’s also deserve shout outs. So much fantastic work drawing the audience in and keeping them in the moment.

Not the best choice.
While his struggle was understandable, there was never really any doubt Patrick would operate on Jason without throwing the surgery. But why would Sam, Monica and the hospital board allow him to? He lost his wife mere moments before cutting into the man he blamed for her death. Surely, Sam, Sonny and the Quartermaines have enough money to fly in a specialist, who was not in shock over losing the love of their life, to take Patrick’s spot in the O.R.

Low point.
It was nice to see Holly breeze in to save her son, but that was the only positive thing to happen in the Wyndemere storyline. There was hope for Helena’s cartoonish villainy to be restored to something greater when she killed her daughter Cassandra without batting an eye. Sadly, she proceeded to lose all credibility when she listened to Holly for two days, as she tried to convince her not to kill Ethan because he wasn’t a Spencer. Thankfully, that recent history wasn’t rewritten, but why would Helena even care whose biological son he was? Luke loves Ethan like a son. That should have been good enough for her to slay Luke’s beloved Dodge in front of him. This painful storyline was once again the momentum killer in an otherwise emotionally griping week.

Buckling under the pressure.
Kate made up with Sonny on top of her desk at Crimson, but then seemingly let her alter ego out to play, as she headed straight for Johnny. Split personality storylines aren't always a favorite, but it could be fun to watch Connie from Bensonhurst work her magic for a while.

More heartbreak.
Blair Cramer from Llanview rushed to Port Charles in the wake of Starr's car accident and learned about Cole's and her granddaughter Hope's death. It will obviously impact "One Life to Live" fans more, as they grieve along with Starr, who they watched grow up on the show just like "GH" fans watched Robin. The death of toddler Hope seems harsh, but an argument can be made for it bringing Todd to town and going after Sonny, who Anthony is blaming for shooting out his tires, thus causing the fatal accident. Would Todd care that much if only Cole died or they were just in a minor accident? The circumstances create complicated drama for sure, but there isn't one story that isn't dark and depressing on the canvas right now. It's too bad they couldn't have just sent Cole back to prison, or have him been the only one to go off the cliff, with Hope landing in critical condition for impact. That way, there'd be one less death and if Michael is who they indeed pair Starr with, he could have completed his transition into becoming the next Jason by helping to raise Hope.

Another blast from the past?
Speaking of things needing to lighten up, wouldn't now be a great time to resurrect the Nurses Ball? Since it was created on the show as a benefit for AIDS research, it could be presented as a tribute to Robin. The characters could continue to mourn her death, while using the fun event as a way to heal and move on. It would also give the viewers a break from all the gloom and doom without abruptly shifting away from the memory of the beloved character.

Aside from enjoying having Robert back and wanting to see Mac touch base with Patrick and Maxie this week, that's all I got this time around. What did you think of last week's "General Hospital?" Share your thoughts below and vote in our General Hospital Poll: Should Jason Know About Robin?

In case you missed any of last week's episodes, check out our sister site's General Hospital Weekly Summaries and vote in our General Hospital Polls. Join us on Twitter @soapoperafan, and Facebook. Come tweet and Facebook with us about "General Hospital," all the other soap operas, "Glee," "Grey’s Anatomy," "Vampire Diaries" and "Venice the Series."

Rick Springfield Back To General...