Poor Kristina and Molly. In spite of all of their mother's nefarious protectors, they still seem to be in the crosshairs of the bad guys and will likely continue to be. When Alexis slid their sweet photos across the table to Johnny's shackled hands I felt certain that Johnny secretly resolved to do his best to keep them safe from this monster of a father. His face didn't signal that, but come on, it's Johnny. Sweet loveable Johnny. I feel the girls will come out okay, this time anyway.

I can't end this week's Blogspittle without commenting about Prince Nikolas. He gets more intriguing to me as the weeks go by. How about that passion when he bent Nadine over his desk just to prove how wrong he is for her? It seems to me that he proved the opposite. I'm not so sure that I like the "Oh dear, which fork do I use?" cliché where the rich guy (Richard Gere) shows the working girl (Julia Roberts) the finer things in life, but still, I am thoroughly enjoying Nikolas who seems to finally be ready to let Emily go.

Overall, I found last week to be a much better balance of storylines. Although the Karpov mess was in the mix, GH felt a little more like a soap instead of "The Sopranos" for a change.

My favorite line of the week? When Liz cut a drooling Anthony to the quick by saying, "I'm a nurse, not scenery." 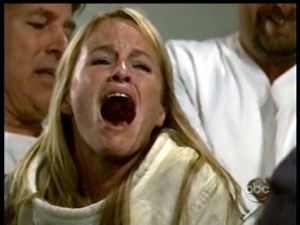 I’ve come to the conclusion that Damien Spinelli is the unluckiest guy in the world. The poor guy simply steps out of a car and gets run down in front of the very female he is trying to impress. (Okay, the cliff hanger lead us to believe that it could’ve been either of them who ends up like road kill, but I think I have a pretty good idea who gets the bumper, don’t you?) I SO loved the scene (just before he stepped out of the stakeout car) in which he looked right at the camera and professed his need to survey the situation. The campy camera angle seemed to scream, “Check this out guys, our hero is going to get an anvil dropped on his head.”

As this whole Lulu-going-off-the-deep-end thing continues to play out, I have to say that I am more and more impressed with Julie Marie Berman. Even though the storyline is starting to bore me, her acting draws me right back in to the point that I feel actual emotion when she cries. Make that cries, screams, wails, etc. A few side notes here; I can’t believe that Jason actually took her out of Shady Brook to see Johnny. Her sales job was incredible and his logic, sound…but still! And I loved the scene in which Alice, Edward and Monica brought Lulu the muffins. I can hardly wait until Tracy brings Luke home and the emotion that is bound to be born of his reconciliation with Laura’s mini-me.

Who wants to rip Robin‘s tongue out for saying no to Patrick‘s proposal? Okay, that might be a bit much, but still, the guy has slowly, yet convincingly evolved into everything she ever wanted but she still turns him down. Jason Thompson has gone up a few notches in my book for that proposal scene. Did you see his face? Quivering chin, tears and even nose tears (I just coined that term. It sounds much prettier than snot, don’t you think?) 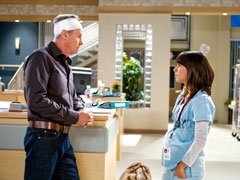