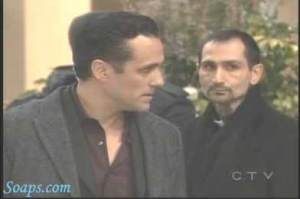 We’ve been wondering where Manny went and now we have an answer. General Hospital fans who like to take a look at the dark side can see Robert LaSardo this Friday (August 22) in his new film “Death Race”.

The tattooed one, as Spinelli might say, will appear as a prison inmate named Grim in this thriller which pits inmates against one another in a brutal road race. The tagline for the movie? “Get ready for a killer ride.” Would you expect anything less based on what we’ve seen of his character(s) on GH? LaSardo appears along with Jason Statham, Joan Allen, Tyrese Gibson and Ian McShane.

The futuristic, gritty film depicts American prisoners who are forced to compete in extreme “Gladiator-style” on prison race tracks. The warden (played by Joan Allen) forces a prisoner who only has a few weeks of time left to get behind the wheel and compete. There are no rules and the prize is freedom(after winning five races). Highly motivated to see his little girl again, he becomes an audience favorite and becomes known as Frankenstein. Filming took place in Montreal last summer. The hard-edged and inventive soundtrack to the film was released on August 19 and is already on Amazon’s backorder list.

Congratulations Robert. Soaps.com is proud of you!