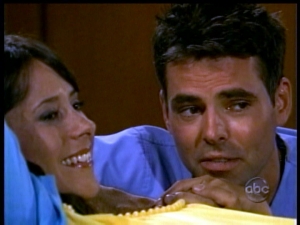 Five times last week I recapped, recounted and recreated episodes of General Hospital. Do you know what I want to do right about now? Blow…spew…emit or basically set free my random musings about last week’s action (or lack thereof.) Feel free to follow suit, whether you agree with me or not. Bibs ready?

Man. The last two minutes of Friday’s show felt like Romeo & Juliet to me. Okay, so we swap out the balcony scene for a hallway in a loony bin, but still, it was Romeo & Juliet material for me. Strong, silent Johnny assuring his true love that they need to separate for now but will be together in the long haul. Julie Marie Berman did a great job of conveying Lulu’s fear and total sense of aloneness when Johnny walked out that door, don’t you think? It was SO time for their time in Professor Segal’s apartment to come to an end, but still, this was bittersweet to me. Or maybe I’m just glad to be rid of Lourdes…we are rid of Lourdes, aren’t we?

While I’m in a mushy mindset, I have to admit to enjoying Robin‘s ultrasound business, too. I must’ve taken about ten screen shots during the moment or two when Kelly announced that they were having a girl and Robin was beaming in every single one of them. I actually had to keep reminding myself that the bump is a pillow with an “outey” and that Kimberly McCullough is not in fact having a baby girl with Patrick. What is wrong with me for cryin’ out loud. And Patrick’s seamless transition from wanting a mini-me to totally falling in love with his little girl was believable as well. Too bad the writers had to ruin it with the old “I’m going to kill the boys who try to get their hands on my daughter” cliché.

I’m also enjoying Alexis and her cold determination to protect Kristina. The words “mama bear” come to mind and I’m thrilled that she didn’t hand her problem over to her bad boy lover to handle this time. Going to Sonny was sheer desperation and that’s when it fell apart for me. I knew his upper lip would sneer and I knew he’d threaten to kill anyone who hurt his daughter. I fear that Alexis has unleashed the beast that is/was Sonny and now we’ll have to watch all of his ugliness return as he rattles Anthony’s cage.

Speaking of Anthony, I never tire of his twisted attitude toward Claudia. I even enjoyed the scene with him holding Kristina’s dolly in the park. Again, what’s wrong with me?

There must be something about this week that totally annoyed me. Ahhh, yes, it was anything that had to do with Karpov. Sam and her determination to bring down the bad guys bugged me and I didn’t even seem to care when I saw that she took a bullet in the gut by week’s end. Don’t get me wrong, I like the character of Sam, but this whole Karpov storyline is a thorn in my side and I don’t I’m going to like anyone while they’re involved in it.

And then there’s Carly. Can the woman say something besides “I will fight for you Jax!” “Kate’s out to get me Jax!” “I’m gonna show you how much you love me Jax!” for a while please? Oh, I just had a thought…you know how she was drowning her sorrows with junk food while looking at her wedding album? What if Spinelli and Carly ended up in the dumps together and ate their way through all the cheese curls and pork rinds that Port Charles has to offer? Now, then I’d enjoy Carly again. I think.

I wish I had some kind of feeling about Liz‘s heartfelt wisdom that she imparted to Jason on the waterfront. Truly I do. I know there is an insane amount of Liason fans that probably ate up every word, but I found myself just not caring. They’re done in my mind, but I do think she gave him some good advice. What’s more, I loved it when he actually took it and went to Sonny for the first real conversation they’ve had since Michael was shot. I hated Kate for ruining it and that’s the first time I’ve ever hated Kate.

I'll leave you this week with one word. Nikolas. Suddenly he's hot to me. I loved the way he told Anthony how things are going to go (with Lulu and Johnny). I love how he doesn't cower to anyone, in fact, Claudia seems to cower a bit to him. I think Nik is finally a leading man and I, for one, am ready to see more of him in this light. Sorry Nadine, but Nik is ready for a real woman now.

My LEAST favorite line of the week? When Robin and Patrick got off the elevator for their ultrasound and Liz gushed,"Big day guys, dump trucks or dollies?"

‘Little Voice’ Canceled By Apple After One Season