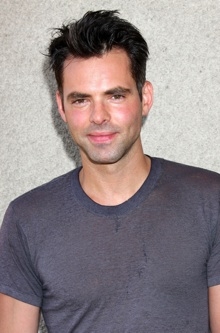 Word is Thompson will play a man whose wife is found dead in Riverside Park dressed as Snow White. This season’s 17th episode, titled “Once Upon a Crime,” will also star Sarah Jane Morris (ex-Julia, “Brothers and Sisters”) and Taylor Kinney (ex-Mason, “Vampire Diaries”).

“Castle” series regular and former “General Hospital” star Seamus Dever (ex-Ian) teased his Twitter followers last night asking, “‘GH’ fans, guess who I’m working with tomorrow?” He followed it up with a promise to tweet a photo of the special guest star. True to his word, Dever posted a photo today of Jason Thompson (Patrick) on the set of “Castle.”

Thompson responded to Dever’s tweet with one of his own: “[‘Castle’] guest star in the morning. Back to ‘GH’ in the afternoon. I like it! Great to see and work with you again man.”

If you’ll recall, Dever played an old med school pal of Thompson’s Patrick on “General Hospital” in 2008. Of course, Dr. Ian Devlin had a dark side and was hired to take out Sonny (Maurice Benard), but hit poor Michael (then played by Dylan Cash) with a bullet instead. He met his end when Jason (Steve Burton) killed him, as he threatened to slash Maxie’s (Kirsten Storms) throat.

Soaps.com will keep you posted on the details of Thompson’s appearance on “Castle.” In the meantime, are you excited to see him on the hit ABC drama? Tell us in the comments below.

Jason Thompson will be reunited with another familiar face when Rick Springfield returns to General Hospital. Join us on Twitter @soapoperafan, and Facebook. Come tweet and Facebook with us about “General Hospital,” all the other soap operas, “Dirty Soap,” “Glee,” “Grey’s Anatomy,” “Vampire Diaries” and “Venice the Series!”