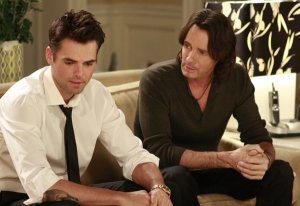 Rick Springfield will reprise his role of Dr. Noah Drake on March 19. He will be back for several episodes to console Patrick (Jason Thompson) over Robin’s (Kimberly McCullough) death.

The most recent actor set to reprise his role on “General Hospital” is Rick Springfield. Per Entertainment Weekly, Springfield will return as Dr. Noah Drake in March.

Noah will show up in a few episodes to see his son Patrick (Jason Thompson), presumably in the wake of (leading up to?) Robin’s (Kimberly McCullough) departure. Springfield will begin taping in February.

What do you think about the latest returnee? Who are you most excited to see again? Vote and comment below.