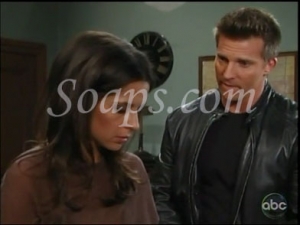 It was a good week in Port Charles, as fans were treated to humor, surprises and, most importantly, love. Of course it wasn’t all perfect, so let’s break it down.

Game changer.
The big news last week on “General Hospital” was that Johnny is in fact Claudia’s son, not his brother. Some see this twist too farfetched considering the actors are only four years apart in age. But, since this is all fiction and we’re asked to believe characters can return from the dead, have their lives stolen by a long lost twin, or age ten years in the span of a few episodes, this isn’t too big of a stretch. Not to mention, we already accept that Olivia is Dante’s mother when Lisa LoCicero is only nine years older than Dominic Zamprogna. The bigger question might be, why are they telling this story now when Claudia is no longer on the canvas? She always seemed overly invested in Johnny’s life (some would say it was more incestuous than maternal), so why not reveal this when it was happening? Regardless, it’s nice to see Brandon Barash do a bang up job in such a meaty storyline. What do you think about the reveal? Vote in our Johnny is Claudia’s son poll?

Crossing the line.
Speaking of the Zaccharas, Anthony’s marriage to Tracy has been a nice touch of comic relief. Even Luke has been restored a little bit to the fun, roguish character we’ve loved over the years during the festivities. However, it’ll be hard to continue to enjoy Anthony’s hijinks with Tracy knowing he pimped out his teenage daughter to a creepy middle-aged mobster. There are certain crimes that can be overlooked in soaps, what he did to Claudia really isn’t one of them.

The beginning of the end.
Even though we only got one quality Scrubs episode last week in the aftermath of Patrick learning the truth about Robin, it was pretty satisfying. The appeal of Scrubs really shone through, as both Patrick and Robin honestly expressed their feelings about her keeping her health issues a secret and they came out of it stronger than ever. It’s going to be tough saying goodbye to this couple, but since Robin received hopeful news when she was in Seattle, it leads one to wonder just how she will be written out.

Reinforcement.
Another couple growing closer in the face of a major struggle is Jason and Sam. Despite Sam believing Franco raped her and could potentially be the father of her baby, they aren't pushing each other away, but dealing with their pain as a committed and loving couple. Too often soaps, and dramas in general, use these types of storylines to drive a wedge between a beloved couple, but "General Hospital" is doing it right. They are allowing the fans to still enjoy their favorite duo by focusing on their love instead of tearing them apart.

Not working.
What started out as a promising mystery, has turned into a momentum killer. Despite Ethan's involvement, Cassandra's story just isn't interesting and brings the show to a screeching halt in between scenes of more engaging storylines. And what happened to Helena? She lurked for two episodes and then…nothing. Word is, Cassandra is leaving Port Charles. No fault of the actress', but the character, and storyline that is going nowhere, won't be missed.

Hiding in plain sight?
Does anyone else think Ronnie could be the one attacking strippers? It kind of makes sense considering he was so gung ho on pinning the crimes on the now dead suspect. He also would know exactly where to fatally shoot him and how to cover it up. Just a theory, but what do you think?

Aside from Spinelli comically making himself at home in Maxie's apartment and loving old friends Robin and Jason being there for each other, that's all I got this time around. What did you think of last week's "General Hospital?" Feel free to share your thoughts below.