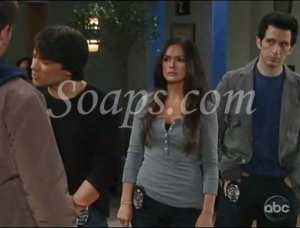 We’re back with the latest installment of our fashion scoop with “General Hospital’s” Head of Wardrobe, Mary Iannelli. Please keep in mind that the wardrobe is purchased months before the episodes air, therefore some items may no longer be available.

Toni: Where can I find Kate’s white blouse from January 9?

Pspate: Where can I find Cassandra’s white coat and dress from January 6 – 9?

A: Cassandra’s white coat and dress are by Diane Von Furstenberg.

Pamela: Where can I find the yellow dress Maxie wore on January 5?

A: Maxie’s yellow dress is by BCBG.

Maura: Who made Robin’s navy blue blazer and white shirt from January 5 – 9?

A: Robin’s navy blazer is by Zara.

Maria, Annmarie: Who made Kate’s off white coat she wore on January 10?

A: Kate’s off white coat is by Nanette Lepore.

Spring: Who made the cream and red military looking sweater Robin wore recently, as well as a few times over the last year?

A: Robin’s sweater is Marc by Marc Jacobs.

Sarah: Where can I find the gold necklaces Robin and Delores wore on January 10?

A: Robin's and Delores' necklaces are from Nordstrom.

Andrea: Who made the black sequin sweater Lulu wore on January 9?

A: Lulu's sweater is by Gryphon.

Corri: Who made Robin's beige raincoat with black detailing from January 13?

A: Robin's beige raincoat is by Karen Millen.

Vicki, Anita: Who designed the maroon colored dress with small pleats down the front Maxie wore on January 16?

A: Maxie's dress is by Betsey Johnson.

Ruth: Who designed Diane's coat from January 16 and Carly's deep red coat the week of January 9?

A: Diane's coat is by Lauren Moffatt. Carly's is by Gucci.

A: Tracy's necklace was purchased in Los Angeles' jewelry district in Santee Alley.

A: Carly's navy sweater is by BCBG.

A: Lulu's sleepwear is by Betsey Johnson.

A: Lulu's top is by Rebecca Taylor.

A: Elizabeth's purple purse is by Le Bulge.

Mandi: Who designed Elizabeth's top and sweater from January 20?

A: Elizabeth's top and sweater are by Charles & Robin.

A: Maxie's dress is by Diane Von Furstenberg.

Did you miss our last General Hospital Fashionista article? Join us on Twitter @soapoperafan, and Facebook. Come tweet and Facebook with us about "General Hospital," all the other soap operas, "Dirty Soap," "Glee," "Grey’s Anatomy," "Vampire Diaries" and "Venice the Series!"