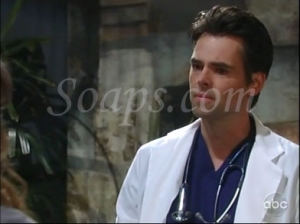 Last week was the first time in my lifetime that ABC aired only one Daytime drama. All the soaps that have preceded “General Hospital” over the years – “Ryan’s Hope,” “Loving,” “The City,” “Port Charles,” “All My Children,” “One Life to Live” – are gone. It’s a pretty strange thing for a diehard soap fan. So, in the spirit of rallying around the remaining ABC soap opera, this week’s blog will once again solely concentrate on the good that is currently happening in Port Charles. Let’s break it down.

The epitome of a soap.
At the risk of sounding like a broken record, Jason Thompson is hitting it out of the park as Patrick learns about Robin’s health issues. Sure, mystery, intrigue, adventure and a mob war here and there all lend to the entertainment of a Daytime drama, but Patrick and Robin are the perfect example of why we really watch them. We want love, romance and heartbreaking scenes of one character fearing the loss of their soul mate. It sucks that Robin is leaving, but the portrayal of an undying love is what hooks us and keeps us watching our stories.

Happily married.
While Sam and Jason’s happiness was short lived after their nuptials, Lulu and Dante seem to be taking a different path. Lulu’s love of the vino could become a concern, but for now, the newlyweds are blissfully happy, even if Lulu can’t find her personal bliss. It was adorably refreshing for the largely angst ridden Lulu to beam as she brought Dante lunch at work and expressed how great being married to him was. Of course, it will become boring if their life together remains all sunshine and roses, but it’s satisfying to see a couple truly enjoy each other and have fun for a little bit.

Welcome back.
Last week was a good reminder that Sonny and Luke can actually be enjoyable. Luke's been tough to like after Jake's death and Sonny's go-to move of yelling as a means of communication is tiresome, so the scene of a devilish Luke handing over dirt on the Zaccharas to a gleeful Sonny was a welcome sight. Hopefully, the follow up episodes of Luke crashing Tracy and Anthony's wedding and Sonny blowing Johnny's world apart, presumably with a cocky flash of his dimples, will continue in this entertaining manner.

Chemistry.
Speaking of Johnny, his cat and mouse game with Carly has been a lot of fun to watch. They have some serious chemistry and it's bringing out the playfulness in both of them, which, after all the drama in their lives, they both need. They don't necessarily have to become a full-fledged couple, but the sexual tension between them has been a high point lately that will hopefully play out a little bit longer.

The voice of reason.
The jury is still out on newbie TJ, but Alexis' handling of him was perfection. Although sympathetic to his plight, she demanded respect when he mouthed off to her and Mac after getting arrested for stealing a car. There's nothing more annoying than watching bratty teens steamroll adults, so kudos to Ms. Davis for setting him straight.

Out of the shadows.
Jax's return doesn’t seem to have any real purpose, but his scene with Michael was worth all the frustration of watching him lurk around town for the past couple of weeks. While soaps are supposed to be about love, they're also about family, so it was a welcome sight to watch Jax and his stepson make peace. Jax also got in some quality parental advice, which may not have exactly gotten through to the angry young man, but either way, it was a nice bonding scene that leads one to wonder just why Jax can't stick around town. What do you think? Should Jax stay in Port Charles?

That's it for me this time around. What are you enjoying about "General Hospital?" Feel free to share your thoughts below.