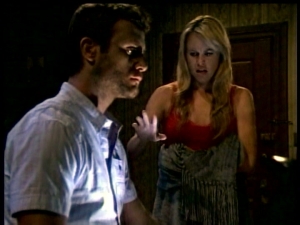 Five times last week I recapped, recounted and recreated episodes of General Hospital. Do you know what I want to do right about now? Blow…spew…emit or basically set free my random musings about last week’s action (or lack thereof.) Feel free to follow suit, whether you agree with me or not. Bibs ready?

Does anybody honestly think that Jerry‘s bullet will ricochet away from Jason and hit Carly, Maxie or Spinelli? I mean isn’t that what we were supposed to be worrying about all weekend? Sorry, not this chick. I’m not so sure the guy’s even going to pull the trigger. At least I hope not. I just this minute realized that my only emotional connection to this entire Karpov/Sonny/Jason mess is that I want Jerry to refrain from slipping back to the dark side. Him flirting with Sam while sleeping with her mother is as nasty as I’d like to see him get from now on. Think I’ll get my way? Me either.

Things in Manhattan have gone from bad to worse, wouldn’t you say? Not only do the lovebirds have little miss Lourdes popping through their window at will, they have the uber scary ghost of Logan floating around, likely dripping blood all over Professor Segal’s floor. The poor birthday girl can’t seem to catch a break except for when she was sitting by Laura’s side getting some much-needed clarity. The scene at Shady Brook was lovely in my opinion. (Once I got passed the whole wig-on-a-fake-Laura thing, that is.) The more Lulu spoke to her mother, the more sure of herself she became. As a mother, I found myself willing Laura to reach out and comfort her girl.

I thoroughly enjoy the pairing of Anna and Noah, but the show pretty much dropped the ball on it this week after giving us only one scene of supply closet action. Who knows, maybe they’re still in there!?!

Now, let’s get down to the mob business. Carly, butt out. Sonny, wise up. Jason, keep your cool. That’s about all the enthusiasm I can muster for this bunch. One more thing: Karpov, go home already. But feel free to wallpaper that warehouse with thousand dollar bills first. That I’d like to see.

Call me nuts, but is that chemistry I see between Nancy Drew Crowell and Matt? The guy creeped me out at first (hey, I never saw him on Days of Our Lives, so what do I know?) but he’s kind of growing on me. As long as he doesn’t steal Maxie from Spinelli, that is.

As for Special Prosecutor Baldwin, shouldn’t he be planning a funeral or something? Running around town breathing hot air on everyone who might have done his dearly departed son wrong isn’t working for me. Although I am thrilled to have gotten a glimpse at the Quartermaine mansion for the first time in months.

I think you all should know that I’m officially on board for steamy, dirty sex between Nik and Claudia. I’m not sure when the two of them together started working for me, and it doesn’t matter I suppose, but bring it on.

I'll leave you with one departing piece of spittle and it's regarding the blushing bride. Practice flowers? I know that money is no object for these people and image is everything for Kate, but staring dreamily at five bouquets of varying degrees of whiteness is a tad off for me. It was unnerving to me on too many levels to go into here.

My favorite line of the week? "Maximista thinks I'm too big of a wimp to address the issue of my wimpishness." Do I even need to tell you who said it? Didn't think so.

Former GH Stars: Where Are They Now?...