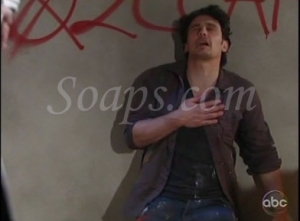 Secrets of her own? (Soaps.com)

Last week was an emotional roller coaster for ABC soap fans. “One Life to Live’s” final week on network TV obviously set a sad tone, but that blow was cushioned a little by news of Tristan Rogers and Emma Samms returning to Port Charles, as well as a few actors migrating from One Life to Live to General Hospital. Even though we’re mourning the loss of yet another soap opera, there are some exciting things to look forward to. Let’s break down what happened and what’s to come on “General Hospital.”

A super soap?
The addition of “One Life to Live” characters to “General Hospital” is not only a gift (consolation prize?) to fans of the canceled soap, but it will ideally give the remaining ABC Daytime drama a ratings a boost. And let’s face it, with the possibility of “General Hospital” getting replaced by Katie Couric in the fall, the show needs every bit of help it can get. But, if they’re going to start combining “One Life to Live” and “General Hospital,” should they include “All My Children” as well? There are several Port Charles residents who could leave and no one would probably care, but, should “General Hospital” fill those slots with fan favorites from the recently canceled soaps, or strictly stick to “GH’s” rich cast of characters? Tell us what you think. Should ABC soaps combine?

Hit over the head.
Obviously, they’re trying to heighten Sam’s anguish over possibly being pregnant with Franco’s baby, but they’re really pushing this “a child is the most incredible thing a woman can experience” thing. We get it. Sam’s torn. Stop with the heavy-handedness.

The end?
Speaking of Franco, Jason shot him and presumably left him to burn in his studio as it went up in flames. It’s not out of the realm of possibility that Franco crawled out of the fire in time, but it would probably be best if he never resurfaced. Franco was an interesting experiment at first, but his subsequent appearances have become less and less entertaining. A villain who doesn’t interact with the cast is not compelling. We’ve already got Helena lurking around not talking to anyone and Jax hiding in the shadows, also not speaking. We’re actually invested in those characters and even that’s testing our patience. So, let’s cut our losses with Franco.

Knowing what she speaks of?
Could Kate have a child out there? Sonny keeps telling her that she doesn’t know what it’s like to have a child when she tries to give him parenting advice. She then gets weird and emotional. It’s a heck of a lot more subtle than Sam’s baby drama, but it does lead one to wonder.

Who needs evidence?
While he's been kind of annoying lately, Michael wanting the only suspect in the stripper case to be arrested based on circumstantial evidence is understandable. He's still reeling from Abby's death and wants to feel like he's doing something. Ronnie, on the other hand, is a cop and should know he actually needs evidence to convict someone. Then again, that's never stopped him before. He just profiles people (mainly Sonny) and concludes they're guilty. Ronnie either needs more depth (and different dialogue), or else John McBain needs to take his spot on the force when he comes to town.

Changing his ways?
Did Sonny really tell Michael he wouldn't kill someone on a hunch when Michael came to him for help with the stripper case suspect? While it may be the most rational thing he's ever said, doesn't Sonny always shoot first and ask questions later?

No more secrets.
Elizabeth told Patrick Robin was having health issues almost immediately after Robin left for "Africa." It's such a nice change of pace for a secret not to be dragged out for months on end. Hopefully, the audience will now get to watch Patrick be there for his wife, instead of witnessing him learn the truth before it's too late and Robin leaves the canvas in whatever manner she will.

Bliss.
Lulu's quest to find her bliss is a nice departure as well. More often than not, a soap character just so happens to fall into the most fabulous career ever - Remember when Lucky all of a sudden became a photographer? - so it's refreshing to watch someone flounder while searching for direction. Sure her and Maxie practicing yoga in heels was ridiculous, but at least her quest is relatable.

Aside from wishing they would utilize Ethan's sex appeal more, enjoying Carly and Johnny's cat and mouse game, and not really caring about Steve and Maggie's secret anymore, that's all I got this time around. What do you think of all the goings on surrounding "General Hospital?" Feel free to share your thoughts below.