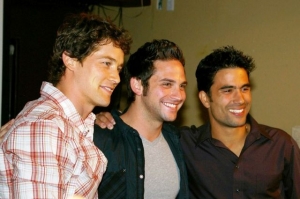 As promised when Soaps.com first reported on last month’s A FUNdraiser for World Vision, a good time was had by all. Although Jason Gerhardt’s Coop is no longer improving the scenery on General Hospital, the actor came out strong during the annual GH Fan Club weekend in the name of fun as well as philanthropy.

First up, the fun! The venue had the intimacy of a coffee bar and the cuisine was Italian on the summery Saturday night (July 12 to be exact) of “An Evening with Jason Gerhardt and Friends”. The stars were brighter than ever because Jason made sure that fans had plenty of talented entertainers to mingle with. Brandan Barash (Johnny Z), Kiki Ellsworth (ex-Stan), Ignacio Serrichio (ex-Diego), Eric Morgan Stuart (“So You Wanna Be a Soapstar”), Bradley Rapier (creator of hip hop dance troupe “The Groovaloos”) and vocalist Farayi Moore were on hand for a variety show. There was also a silent auction which, among other fantastic prizes, included the opportunity to perform a scene from a GH script with “Coop”.

Proceeds from the event were given to Jason's official charity for 2008, World Vision (a Christian humanitarian organization for children in desperate need of food, shelter, education and medical attention.) "I know that I'm here and that I get to do what I love all because of a higher power," says Gerhardt, "as a way to give thanks for my blessings, it's important that whatever events I or my fan club host have a greater purpose than for the fans to just come to see me. It's important that we all find a way to give back to our global community."

The event was organized by Lisa Sullivan, Jason's Fan Club President. She tells Soaps.com how elated she and Jason have been with the response from the fans. "We are humbled by the generosity of the fans. They really came through for us," she said.

Former GH Stars: Where Are They Now?...