One Life To Live Stars To General Hospital. (Updated.) 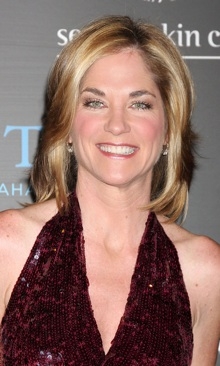 Although, as reported below, Kassie DePaiva made it seem like her stint on “General Hospital” might not last that long, her onscreen daughter is another story. Kristen Alderson tweeted, “Just signed my ‘General Hospital’ contract! 3 years! Here we go…You guys ready!?”

Disappointing Jolie fans everywhere, Soaps in Depth reports that “General Hospital” has no plans to bring Melissa Archer’s Natalie to Port Charles in order to reunite her with John at this time.

After praising the final week of “One Life to Live” episodes on her blog, Kassie DePaiva (Blair) addressed her upcoming stint on “General Hospital,” saying, “I must say, the ads and the press release by ABC is a little misleading. Frank Valentini, ‘GH’s’ EP, asked me to come out for a couple of shows in February and I’m thrilled. Not only will I get to work with a fantastic cast…but a little piece of ‘OLTL’ lives on. That makes me very happy. And who knows where it will lead. Once the Mannings come to town anything is possible. I wish everyone at ‘GH’ the best. No one loves Daytime more than Frank Valentini and Ron Carlivati [head writer] and no one works harder than those two men. ‘GH’ is in good hands and hopefully ABC will let ‘GH’ live on! See ya’ll soon in Port Charles!”

Meanwhile, Kristen Alderson (Starr) recently tweeted that she will begin taping at “General Hospital” on January 27.

“One Life to Live” might be going off the air on January 13, but that won’t be the last you see of several of the soap’s stars. ABC just announced that Kassie DePaiva (Blair), Roger Howarth (Todd), Michael Easton (John) and Kristen Alderson (Starr) will be making the move to Port Charles. Not only will they be on “General Hospital,” but they will be playing their “One Life to Life” characters for a new storyline to begin production in late January.

Of the move, former “One Life to Live” and current “General Hospital” executive producer Frank Valentini said, “We have a very exciting story planned for the citizens of Port Charles, with Sonny Corinthos [Maurice Benard] at the center of it! I am confident viewers and fans alike will be excited for the arrival of John (Easton), Starr (Alderson), Blair (DePaiva) and Todd (Howarth). Incorporating characters from ‘One Life to Live’ continue the legacy of the show as we weave them into ‘General Hospital.'”

What do you think of this development? Vote and comment below.

Look who else is coming to Port Charles: Tristan Rogers Back to GH. Join us on Twitter @soapoperafan, and Facebook. Come tweet and Facebook with us about "General Hospital," all the other soap operas, "Dirty Soap," "Glee," "Grey’s Anatomy," "Vampire Diaries" and "Venice the Series!"