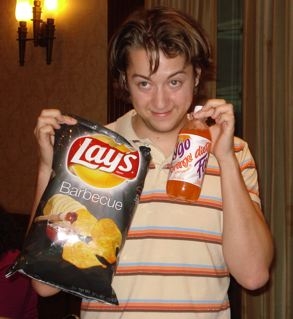 We asked and boy did we receive! With so many General Hospital fan events going on this summer, Soaps.com asked lucky fans who were able to attend to share the wealth on our Message Board. A prolific poster named “NoSoup4you” did just that, times three!, and just to make sure you all see it, we’re posting the transcripts here for you. The event in question took place in New York City over the weekend of July 26 and 27. Fans and actors gathered at the Marriott East Side on Lexington Avenue and did what people do at fan events – get to know each other.

NoSoup4You’s first event was Bradford Anderson (Spinelli) from 6:00 to 9:00 PM on a Saturday evening and here’s what she shared with Soaps.com:

“Bradford was soooooo animated and excited to be at the event. I don’t think he ever sat except for at the autograph signing…..he was all over the stage, very theatrical. He hopped around and was nothing but pure energy (might have been the 2 Redbulls he was drinking). His hair was long like Spinelli’s and he kept running his 2 hands through consistently. He wore an orange and white stripped faded polo with dark blue jeans.

One of the first questions he was asked was about the first scene shared between Dr. Hunter and Spinelli…”

If you want to read the rest of NoSoup’s conversation with other posters regarding this event, click here.

Apparently NoSoup had a big night out afterwards, yet made it back to the Marriott bright and early Sunday morning for Kelly Monaco’s event. Here’s the recap of that event that took place from 9:00 AM to Noon:

“Yes, 9 am. But even after my night in the city I made it on time! Her event was with Greg Vaughan aka Lucky. Kelly was sooooo beautiful and tiny. Greg made jokes about having to film shirtless scenes next to her and feeling insecure b/c she is in such good shape.

Kelly wore her hair down, and it looked darker then usual, she was also very tan. She was dress in a white tank top (black bra) and high-wasted jean skirt. She was also sporting some high-healed sandals and large silver hoop earrings.”

Fun huh? If you want to read the rest of NoSoup’s conversation about Kelly, click here.

Last but certainly not least was the event with Port Charles' most recent dead-but-not-gone character Logan Hayes (actor Josh Duhon). It took place from 1:00 PM until 4:00 PM and here's what NoSoup had to say:

"Josh came into the room with a lot confidence. He wore a faded t-shirt, brown windbreaker jacket over that and dark blue jeans. He was also wearing a very fancy watch and his hair was much longer and gelled back.

Right from the get go Josh said he was pumped about this fan event b/c he is no longer contractually obligated to ABC and we could ask him anything. Heeheehee…… He mentioned he was filming Monday and Thursday this week and that is pretty much it.

He is definitely not going to be doing daytime. He was offered the role of..."

If you want to read the rest of NoSoup's conversation about Josh, click here.

Soaps.com cannot thank NoSoup4You enough for giving the rest of us an inside look at the storylines, characters and actor's insights. Keep up the good work!