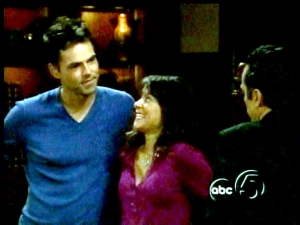 Snap out of it Lulu. (Soaps.com)

Fives times last week I recapped, recounted and recreated scenes for General Hospital fans who didn’t have the luxury of stopping their lives to plop down in front of the tube every afternoon for an hour. And you know what I want to do right about now? Blow. That’s right. Spew…emit…and basically set free my random musings about last week’s action (or lack thereof). Maybe you’ll agree with me, maybe you won’t. But at least I’ll enjoy the release and be ready to document all that this week has to offer. Until it’s time to blogspittle again next week, that is. Bibs ready?

Carly, Carly, Carly: Does she honestly think that sexing Jax up is the answer to their problems? The man basically left her because she doesn’t respect his business sense, so what does she do? Stow away on his very next business trip and cause him to be late. (He was likely very mussed as well. The man not only had sex en route to his meeting, he parachuted out of a plane. Talk about business casual. Let’s just hope he took the time to wash his hands before the handshake, eh?)

As for little miss Lulu, does anyone recall the scene in “Moonstruck” when Cher slaps Nicholas Cage and tells him to snap out of it? That’s pretty much all I can say about Lulu at the moment. Well that and with all she has to worry about does she really need to be jealous of a school-girl crush on her man?

I don’t have much to spew about when it comes to Anna‘s storyline last week. Eli was a putz, but she came out smelling like a rose. Robin, Patrick and Noah rallied behind her and Max even took one for the team. As a side note here, I’m always taken out of the moment a tad when Noah/Eli has a slight Aussie accent. Aren’t you? In any case, I look forward to seeing Anna and Noah together, and for the first time that I can remember, Robin didn’t bug me this week. I enjoyed Sonny’s little scene with her (when she came to him and asked for Max’s services) – their history is so rich, their closeness so apparent.

I was so shocked to see Monica that I had to stop and think…”Oh yea, where has she been?” (And I write the spoilers!) I actually had to give it some thought to remember that she was in rehab after drinking vodka from every Aquafina bottle on the Eastern seaboard. Now, either this represents a lapse in story telling on the part of General Hospital or I have killed far too many brain cells since the days of watching Luke & Laura’s (first) wedding from my college sorority house. I vote for the former.

Nadine and Nik? Give it up girl, the prince pretty much wants to buy Girl Scout cookies from you and maybe give you a pat on the head for a job well done now and then. I am thrilled to see Nik in scenes that don't even mention Emily finally, but I just think Nadine's charms would play better off of someone else.

Scott's rampage over Logan's death seems a little one-dimensional to me. Predictable, vindictive and a real snooze fest. Sorry. I love Kin Shriner, but his material since coming back? Not so much.

I'm afraid the rest of my rant is all lumped under one category - Mobspittle. Karpov, blah, blah, blah. Sonny honestly thinks he's doing Jason a favor, blah, blah, blah. (He was clearly happy to see Kate return from Paris, so that redeemed him a tad in my book.) I have to confess that Claudia's constant presence in this storyline baffles me, Ric's too, for that matter. Just go roll in the hay already. Now that I'm looking forward to! The week ended with Jason telling Sonny that they need to talk. Scary. Or at least it was supposed to be scary. I have a feeling that they're truly just going to talk, don't you? Sam, okay, I like her newfound sense of purpose and really like how much Lucky seems need her.

My favorite line of the week? When Monica returned home to the Q mansion and said, "I feel like I've walked into a house of morons."