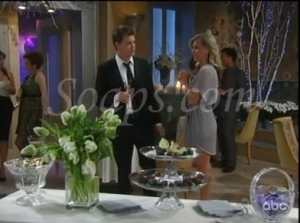 Happy New Year! I hope 2012 is good to all of you. I also hope this year is a lot better to our soaps than 2011 was. Even though “General Hospital” ended 2011 the way it spent the majority of it – on a mostly bleak note – hopefully things can turn around in 2012. Let’s break it down.

Capping off a downer year.
While “General Hospital” gave us a happy Christmas episode, they just couldn’t end 2011 on a positive note. Instead of couples flirting and families celebrating, with a touch of angst sprinkled in, like they did during the 1996 GH New Year’s Eve episode, Carly’s party turned into a rage filled yelling match as Michael outted his mother about knowing Jax was alive and everyone ganged up on her. If that wasn’t a big enough buzzkill, Michael then went out into the street and was hit by Jason’s motorcycle. Happy New Year fans! It could have been a decent episode considering Anthony proposed to Tracy, Lulu and Dante were finally happy, Jax was on his way back and the Drakes spent a lovely evening home with their daughter. It’s too bad the Metro Court party didn’t allow for anyone in attendance to have fun before Michael dropped his bomb. His reveal could have been a good cliffhanger after watching the party guests ring in the New Year.

Keeping secrets.
It was kind of easy to understand why Carly kept her suspicions about Jax being alive to herself after witnessing Sonny's reaction to hearing the truth. He went from charming dimple boy to mobster thug in a blink of an eye. As Carly pointed out, it was not out of the realm of possibility that, had Sonny known Jax didn't die, he would have finished the job. And why was Michael so angry about it? As Soaps.com poster Unicorn Girl pointed out in the comment section, "Michael acts like he grieved when Jax died. I don't recall that. As a matter of fact wasn't he telling everyone who would listen why Sonny had to do what he did?" On the flip side, ransmha stated, "Michael was right, she put Morgan, Michael, Joss, Alexis and everyone else that loved Jax through hell for nothing. And don't forget, Sonny got involved in the first place because Carly asked him to." What do you think? Was Carly right to keep Jax's secret?

New Year wishes.
"General Hospital" is starting a new year that will include a new head writer, Ron Carlivati, and new executive producer, Frank Valentini. After the depressing and painfully slow direction soon to be replaced head writer Garin Wolf took the show in last year, there are some things I'd like to see the new regime change.

To begin with, please lighten things up a bit. Yes, trauma and heartbreak are all part of a good soap, but they need to be balanced out with an upbeat story or two. For every death there should be a romance or fun caper, not an addiction or rape piled on. Next, pick up the pace. The storylines of late have been dragged out to the point of boredom. By the time Lisa was finally offed, did anyone care? In addition, if you're going to have a villain torment the show's hero for two years, let him talk to someone other than himself. Watching Franco make cryptic threats against Jason to his art canvases in a room all by himself does not make him interesting or scary. Ditto for him largely being off-screen during his reign of terror. Also, it goes without saying that the rapidly vanishing Quartermaines need a juicy front and center storyline. Maybe bring a few family members back. Finally, let couples be happy for a while. Long awaited weddings for fan favorites aren't exactly satisfying if the bride gets kidnapped or raped immediately after the nuptials.

That's all I got this time around. What do you hope to see happen in Port Charles in 2012? Feel free to share your thoughts below and vote in our favorite 2011 GH couple poll.