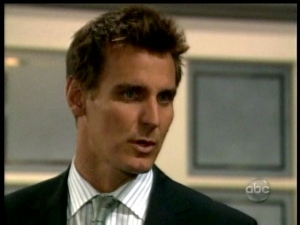 Four Weddings and a Peanut.
In addition to all of the action going on in Port Charles, there are plenty of developments in the personal lives of some of our favorite General Hospital actors as well. What better place to start than with the birth of Ingo Rademacher’s (Jax) son Peanut. That’s Peanut Kai Rademacher to be exact. He is the first child for Ingo and his fiancé Ehiku and came into the world on July 11 with the help of a midwife and doula. The family of three is doing well and looking forward to a summer of ’09 wedding for Peanut’s parents.

Weddings number two and three both take place in mere weeks! Julie Marie Berman will wed her “best bud” Mike Grady on August 15th. Also planning a trip down the aisle are two actors who no longer grace the set of GH. Kiko Ellsworth (ex-Stan) and Christine Carlo (ex-Leticia) have been dating for seven years and will join Jonathan Jackson (ex-Lucky) and Lisa Vultaggio (ex-Hannah Scott) in the category of “former GH cast mates who marry.”

Wedding number four takes place on September 27. That’s when Tyler Christopher and Brienne Pedigo will marry. They’ve been engaged since November of 2006 and you can catch Tyler’s comments about the wedding planning in a previous Soaps.com interview with Tyler.

Soaps.com will keep you updated on any breaking news about Peanut or anyone else related to GH for that matter. Congratulations to all!