Not exactly father of the year.
For reasons a tad bit unclear, Lucky left his kids before Christmas because he felt the need to return to Ireland. His seeing a red haired woman with a red hat like Siobhan's should have been a sign to stay in town and solve her murder, not hightail it to her hometown. Or maybe it should have been a reminder that the last time he left he was told to turn around because his son needed him. Instead, Lucky decided to follow in his deadbeat father's footsteps and abandon his children. His last scene with Liz was awful, as he basically left in the middle of a fight. In addition, he didn’t even say goodbye to Lulu. At least, after two years of constant crying, he didn’t go out with tears streaming down his face. His final scene with Ethan was a reminder of how enjoyable he could be when he was just kicking back and chatting with his siblings. They should have let him do more of that instead of torturing him for years. A more understandable exit for Lucky would have been if he received an S.O.S. from Luke, Laura or Nikolas and he had to race off to help one of them. At least it would have made more sense. It'd be nice to think it was Lucky's father at the churchyard who approached him and they're going off on a great adventure together befitting Spencer lore, since Lucky forgave an off screen Luke. Who do you think was Lucky's Ireland visitor?

Another dismantling.
Now that Lucky is gone and Ethan Lovett is rumored to be exiting, that could leave Lulu as the sole Spencer left on the canvas. Sure there's Aiden and Cam, but they need to be SORASed before they really count, and Luke, but he's hardly ever there. Much like the Quartermaines, the once core family is a shell of its former self. It's hard to understand the reasoning behind this. Why dismantle these beloved families in favor of "mysterious" women lurking around Wyndemere (where there are no Cassadines by the way) and sensitive doctors who paint?

Exit looming.
Watching Robin and Patrick celebrate Christmas and just be generally adorable together makes it all the tougher to accept Robin's exit next year. It's great that Anna is returning before this occurs, but who knows how long she will be back, so it's just one more previously central family - the Scorpios - who will be largely absent on the canvas. Only Mac and Emma will be left. Maybe they can join the Quartermaines during the holidays for a large pizza instead of a small.

Aside from being over Elizabeth's damsel in distress act, and Jason and Michael's constant state of anger, that's all I got this time around. What did you think of last week's "General Hospital?" Feel free to share your thoughts below. 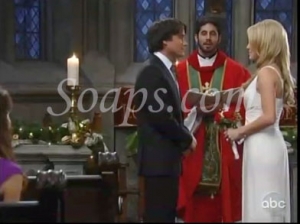 After months of dark stories, “General Hospital” finally lightened things up for Christmas. Aside from Liz, who struggled with Lucky leaving, and Lucky, who abandoned his kids in order to search for something, Friday’s episode was downright upbeat. The Qs got snarky with each other, but that’s what they do, and Tracy eventually felt the holiday spirit, even if she wasn’t the one to leave the gifts under the tree. Jason and Sam let go of Franco for the day and basked in their love, Robin and Patrick had a loving family celebration and Dante and Lulu had a wonderfully romantic wedding. It was a good episode to send us off into the holiday weekend, unlike the GH Thanksgiving episode, but it was also a huge reminder that the core families of Port Charles are dwindling. Let’s break it all down.

A quiet affair.
Even though Olivia was the only recognizable character in attendance, Lulu and Dante’s wedding was pretty perfect. Nothing threatened it from happening, Lulu didn’t feel the need for liquid courage, and there were no second thoughts. Lante was happy, romantic and fun. Everything that made them a good couple to begin with. Even the atypical priest, who would be a welcome addition to Port Charles, and Olivia’s gushing added some entertainment to the festivities. Despite no one being there to sit on Lulu’s side of the aisle, it was a highly satisfying soap wedding.

General Hospital Weekly Spoiler Video: The Truth Will Be Told