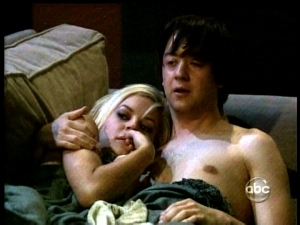 As promised, today I’ll share the rest of what Bradford and I chatted about in our first (phone) interview together. If you missed Part I or Part II, you’ll want to read them for sure. I asked Bradford what a lot of us have been wondering since Jason Cook joined General Hospital. How does he feel about sharing Kirsten Storms (since Jason played her love interest when they both were on Days of our Lives). “Well, I mean, as a friend of hers I was excited for her. I was a little curious as to what would happen to the Maxie/Spinelli story though. I always have full faith in our writers and am not nervous that the rug will get pulled out from under me. Jason will be a good addition in a lot of ways.” Very nice response, wouldn’t you say? And truly sincere, I might add. He did confess to being a little possessive of Maxie, however.

I told Bradford it seems that Spinelli has chemistry with any of the crushes that he shares screen time with. When he was all a twitter over “The Blonde One” (Lulu), it worked for me. When he escorted “Fair Leyla” to the wedding, it worked for me. I attribute it to the fact that “The Jackal” is all heart. Hence, wherever his heart goes his fans will follow. “That’s good to know,” Bradford told me.

Both of Bradford’s parents are back east. His mother lives in Washington D.C. and his father lives in New Hampshire (where Bradford was born). His older sister also lives in D.C. Her work is “…a much more noble cause” (according to Bradford); she works to benefit developing countries. He told me that his family, “…has been supportive from day one in terms of this crazy career I’ve chosen. They’re proud without having too much pride if that makes any sense. I mean, this job could go away at any point.”

We hope not! Bradford is under contract and although he wasn't exactly sure when it comes up he told me that it's not in the "...near, near future." I shared my concern for all of the new, young actors (Coop, Logan, Johnny) that GH has brought on over the past year and wondered how the storylines could sustain them all. (Now that two of the three have already been killed off, we have to conclude that they couldn't!) Bradford added, "There's no one that I compete with in terms of my place in the show, you know, the young, brooding male presence, so I feel pretty good about that."

Bradford is very humbled by the fans responses to him and to Spinelli in general. I asked him what is the nicest item that he has received from a fan and he had to think for a minute. "A signed picture from Don Knotts," was his decision. (Apparently the fan knew that Bradford enjoyed watching Knotts while growing up and admired his unique style of physical comedy.) Can you picture little Bradford with his after school snack (orange soda and chips perhaps?) watching Andy Taylor and Barney Fife? I certainly can. I was more of a Gulligan's Island girl, but I wasn't oblivious to the charms of Mayberry.

Before we said our goodbyes, Bradford agreed to do a Live Chat on our Soaps.com GH message board. We've set it up for this Wednesday, July 30, at 6:00 EST. I hope you'll enjoy getting to know the man behind Spinelli as much as I have. Hearing his thoughtful voice and somewhat serious nature, it makes me appreciate his portrayal of Spinelli all the more.

What's up with Lindze Letherman?