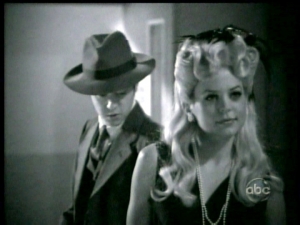 If the response to Part I of my interview with the man behind sweet Spinelli is any indication, we’ve got ourselves a new fan favorite these days. (Move over Steve Burton!) No big surprise to me – the moment Bradford Anderson appeared as the geeky Port Charles University computer wiz I could feel something was about to happen. Over the past year we have watched Spinelli put his unusual talents to work, not only for Jason, but to transform himself into somewhat of a “hunk”.

I used that word when speaking with Bradford and he laughed out loud. “I don’t subscribe to that term,” he told me once he regained his composure. He added, “I never imagined that I could be a recognizable soap character. I always thought as an actor if I came on a soap I would do a little something, not become a staple.” We talked a little bit about “soap hunks” in general and the attributes that they all normally have in common. He joked, “It’s funny to me that I seem to be the most frequently disrobed guy on the show right now.” He told me that he was in much better shape when he first hid his naked body behind the laptop than he is right now, so the love scene with Maxi probably shocked a few people. Needless to say I assured him that his fans at Soaps.com love him no matter what condition his guns are in.

Bradford told me that before coming on General Hospital he had never seen anyone on soaps that looked like himself. “To be lucky enough in any medium to find a character this rich that I can live in, that’s the gift. This family that I’ve inherited (the group of) fans, actors, crew, is an unbelievable bonus.” As he spoke, my mind was scrolling through my thirty-plus years as a soap fan in search of another male character that defied traditional “hunkdom” and became a leading man because of his unique self. Finally I had my parallel – Tony Geary. I reminded Bradford about Luke’s infamous perm and skinny bod from the 70’s and pointed out that the man just broke Emmy history for cryin’ out loud. (Here’s the scoop: Tony Geary’s Emmy History.) Bradford seemed to humbly disregard my inference that a similar kind of iconic career is entirely possible for him and said, “I respect Tony so much. (His longevity) makes sense because he’s such a wonderful guy and gives his all in every single scene.”

Then we touched on another dashing and romantic lead male in Port Charles, Sonny Corinthos. Spinelli clearly rubs the brooding ex-mobster the wrong way and I told Bradford that it breaks my heart when he cruelly calls Spinelli “Geek Boy”. When this happens, Spinelli usually is reduced to wounded-puppy status and retreats somewhere to go lick his wounds with the aid of orange soda. He told me that Maurice (Benard) doesn’t like to do that and added, “Mo and I really enjoy each other.” I’ll try to remember that the next time I want to reach through my TV screen like a mama bear and swat Sonny away from Spinelli’s sweet face.

I still have a few tidbits to share with you regarding Bradford’s contract and his feelings about sharing his lady-love with the dastardly Dr. Matt Hunter (Jason Cook). Look for Part III of my interview with Bradford next Monday. In the meantime, Bradford and I are in the process of nailing down a time and date for our Live Chat with Bradford on the Soaps.com GH message board – so stay tuned.