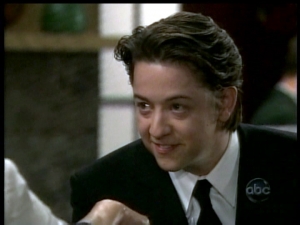 A brief bask in afterglow. (Soaps.com)

As you can imagine, talking with Bradford Anderson (Spinelli) isn’t boring. In fact, my recent conversation with him was among the loveliest I’ve had since becoming the “All Things GH” for Soaps.com person. He’s a very thoughtful fellow, in that he takes the time to choose his words consciously in lieu of giving the first comment that pops into his head. Granted, he may be somewhat new to the interview game (since he only exploded on the soap scene last year), but I’m guessing this is something he will adhere to throughout his (promising!) career. He’s just that kind of guy.

Let me first share what he had to say about the fact that his character is finally going to have sex with Maxie (or with anybody for that matter!) Bradford said, “The reason why I like (the portrayal of his character and Maxie sleeping together) is that it’s much more character driven than visually driven.” He explained that in most soap sex scenes, the drama is there for the audience’s visual pleasure. He added, “I think what is more valuable to Maxie & Spinelli’s love scene is to see what led them there.” (After seeing yesterday’s episode in which Maxie was more frightened than ever before and Spinelli gently, yet bravely, committed to single-handedly keeping her safe – I completely understood why Bradford is happy with their characters’ physical evolution that led them to one another.)

To be sure, Spinelli is unlike any soap character I've ever seen. I wholeheartedly complimented his work on the character that he built from the ground up. I believe the words I used were, (that Spinelli is) "…a wonderful mess." Bradford laughed and had to agree. He said, "Playing Spinelli is fun for me. He was supposed to be a two or three month arc when I was first brought on -- his place as a comedic character was very clearly defined. He was a novelty character; I didn't feel the need to make him more than that. But when he was put in situations, like when he fell for Lulu or started achieving a friendship with Jason, exploring those relationships brought out a certain humanity about him. It was the (Metro Court) hostage crisis that really forced him to face his insecurities… that particular story telling brought him out. I credit the writing during that time."

I doubt that any conversation that Bradford has had regarding his character has gone without mention of the "Spinelli-isms" that he rattles off so effortlessly. It is the "Spinelli-isms" that show the guy's true innocence, "… (They) are the shell of a very insecure, unpracticed young man," Bradford shared. I asked if any of the terminology comes directly from him or is it all scripted. He told me, "Our job is to look as natural as possible when we deliver our lines. Sometimes lines don't compute, so whatever comes out of our mouth is the most natural - some call it adlibbing. I kind of have a Spinelli vocabulary now so if something else comes out it's close because I'm used to speaking like that at this point." He added that he never reads his script and feels as if he needs to change it. I admitted that there are days in which I almost hate to see him come into a scene because as the Soaps.com General Hospital recap writer, capturing the essence of his dialog can be dicey at best. Instead of Maxie, he gushes "Junior Fashionista". In lieu of the PCPD, he delivers "Misguided Law-Abiding Ones". Anthony Zacchara has become "Demented Denizen of Darkness", you get the idea, right? If I had to dub a moniker on Damien Spinelli it would be "Dastardly devil of the word count" or some such ilk.

Next week I'll share what else Bradford and I talked about. We discussed Sonny Corinthos' hurtful slinging of the term "Geek Boy", Bradford's thoughts about how he fits (or doesn't!) into the quintessential "soap hunk" mold and much more. Also look for an announcement of when Bradford joins us in the GH Message Board for a live chat. Until then, enjoy the transformation on GH of how Spinelli and Maxie cross over from friends to lovers. And back again.

Genie Francis to Return in August