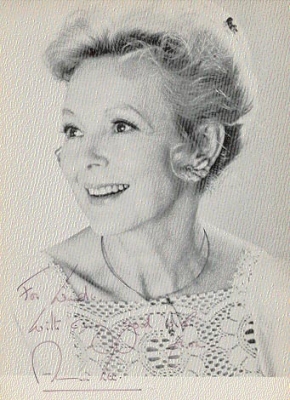 Jeffrey Byron, (ex-Dr.Mark Boardman on Port Charles) may not technically be a General Hospital vet, but his mother Anna Lee (Lila Quartermaine) was soap opera royalty. She passed away in 2004 at the age of 91 after being the heart of GH since 1978. As such, Soaps.com would like to tell GH fans that her son Jeffrey will appear on The Bold and the Beautiful this week (July 11) as a Justice of the Peace.

Byron’s acting resume lists various prime time shows as well as writing credit for “Dungeonmaster”, a Lifetime sci-fi movie from 1985. He appeared on the 31st Annual Daytime Emmy’s to accept the Lifetime Achievement Award on behalf of his mother who had only weeks earlier passed away. The host that year was GH’s Vanessa Marcil (Brenda Barrett), who was very emotional about the passing of her friend Anna.

Now that we know that Anna Lee’s son Jeffrey is available, wouldn’t it be nice if Lila had a mysterious son from a secret lover appear on the scene? With precious few Quartermaines left in Port Charles, any link to the former lead family would be welcome.

If you’d like to read more about Anna Lee and her rich life in and out of show business, check out Soaps.com’s Anna Lee’s Memoir Interview.

Have Your Lemoncello Cheesecake and...