Spreading her wings.
After not seeing her for a while, Diane resurfaced to tell Sonny Brenda has moved on and was happily living abroad with Alec. Brenda has even stopped wearing those extra long sleeved shirts! That's serious progress. After seemingly taking joy in making Sonny feel like crap about the love of his life, she resigned as his attorney so she could become a gossip columnist. It’s not that I don’t understand why she wouldn’t want to represent a crime lord anymore, but she never made any bones about enjoying the perks that came with the job, so I thought she needed to step off her high horse a little bit. And I’m not clear if Diane has quit being a lawyer altogether or just being Sonny’s attorney. Because let’s face it, being a gossip columnist probably won’t pay for as many Cartulos as being a high profile defense attorney. It seems like an odd career jump for her, but as long as it leads to more fun scenes for Diane I'm all for it because I’ve missed her sassiness.

Goodbye for now.
Kristina bid her friends and family goodbye as she took off for Yale. I should say, she bid her family goodbye, because she doesn’t have any friends. That’s pretty much the problem with the character and how they’ve written her. She’s an attractive, smart, teenage girl, yet she has no friends or male prospects outside of Ethan. If they fired Lexi Ainsworth solely because she was "too young" then I can only assume they just didn’t know how to write for her. Her infatuation with Ethan could have eventually fizzled out, as she met a boy more age appropriate for her. Then, if that couple was their end game, they could have revisited the pairing in a couple of years. They’ll presumably recast Kristina at some point with an older actress, who will discover Sonny pulled strings to get her into Yale and return to pursue Ethan. It’s just too bad they couldn’t figure out a way to utilize Lexi Ainsworth's talents so the audience could continue to watch her grow into an adult.

Aside from being intrigued by Anthony’s cryptic comments to Johnny about Claudia, not understanding why Spinelli carries a basketball around with him, and being glad the creepy Halloween masks are gone, that’s all I got this time around. What did you think of last week’s "General Hospital?" Feel free to comment below. 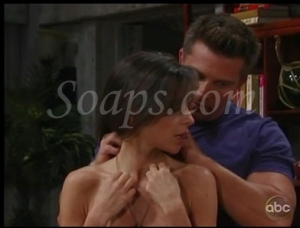 Things seemed to have picked up a little bit in Port Charles since last week and were a little more interesting, but the Franco mess has me a little worried about what’s to come. Let’s break it down.

From dark to darker.
I am glad Franco has finally made his move against Jason and Sam, but him walking towards Sam in the shower while Jason watched, had me pretty concerned about what his intentions were. If Franco assaults Sam in some way, I’m going to be pretty disgusted. I’m with Soaps.com poster Scrimmage, who, in the daily recap comments, suggested maybe Sam is on to Franco, brought a gun with her in the shower, will get the upper hand on him and then save Jason. Wouldn’t that be a nice change of pace for the woman not to be the victim?

Curiouser and curiouser.
Not only am I thrilled that Steve is getting a storyline after two years, but I’m also pretty intrigued by the mystery of it all. He’s got a lady from his past coming to the hospital and Johnny blackmailed him to help Anthony. Could the two be related? I’m not sure what Johnny could possibly be holding over Steve’s head to make him do a favor for the mob, but my interest is definitely piqued. What do you think is going on? Vote in our General Hospital Poll: What Does Johnny Have On Steve?

Off on his own.
Lucky’s story is plugging away as well, as he found the church Siobhan wrote him about. I’m guessing it’s his guilt over Siobhan getting killed, not his undying love for her that is driving him. Either way, he followed her instructions and discovered a message written out with stones that said, “Go.” I would think Ethan or even Luke could be a good companion on his quest, or anyone from Port Charles really, just as long as he isn’t isolated in Ireland by himself for too much longer.