General Hospital Poll: What Does Johnny Have On Steve? 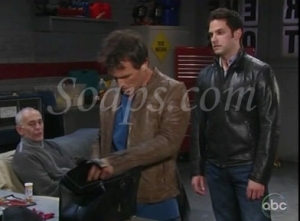 Last week, Johnny coerced Steve into tending to a wounded Anthony. He’s been a straight arrow up until now, even expressing his disdain for the mob element in Port Charles, so what’s going on with the good doc?

What does Johnny have on Steve forcing him to play the role of mob doctor? Vote below and check out the latest General Hospital Weekly Blog.