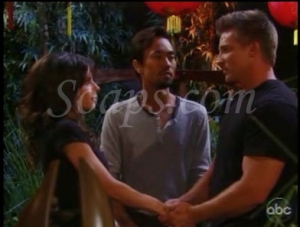 On the verge of waking up. (Soaps.com)

Last week was filled with a lot of romance, but, of course, danger lurked. It is Port Charles after all. Let’s break it all down.

Mr. and Mrs. Stone Cold.
Sam and Jason’s wedding was wonderfully romantic. It may not have been traditional, but that’s what made it so great. Neither Sam nor Jason needed all the trappings. They just wanted to be married, so they took off and ended up at a Chinese restaurant. As luck would have it, the owners’ grandson was an ordained minister who married them. You can always feel the love between the two and it was palpable during their ceremony, which fit the couple perfectly. Of course, Maxie’s head exploded when she found out they eloped, but she ultimately realized she should have taken their wants into consideration before planning the wedding of the century. Some sweet touches were also thrown in there with Alan and Lila’s rings. All in all, it was filled with the romance one expects from a soap and thankfully, despite him lurking, Franco didn’t ruin it. I’d like to see the Chinese restaurant become the new Port Charles hangout. I was kind of digging the grandson and Port Charles could certainly use a little more diversity.

The next to get hitched?
Jason and Sam didn’t have a monopoly on romance last week, as Dante put his heart on the line when he proposed to Lulu. It probably wasn’t the best timing considering they were broken up, but his speech about him being a work in progress, but a good investment, was pretty sweet. You could see his heart fall, as he backed away from her when she couldn’t say yes. She ultimately decided to accept this proposal though, but by episode’s end on Friday, she was left waiting for him, as it looked like Anthony Zacchara had other plans for her intended.

Not seeing it.
Carly and Shawn shared a close moment when they danced at Kelly's. It was a cute scene as he cooked for her and chided her over her own lack of cooking skills. I like them as friends, but I'm not feeling them as a couple. I would like to see Shawn in a romantic storyline, because he's deserving of one and he's getting a little creepy just stalking Carly all the time. Even if it is his job.

She's back.
Well, it seems like Lisa is on her way back. The only thing that could make this interesting for me is if she'll be causing trouble for someone other than Robin and Patrick. I enjoyed her alliance with Johnny and hope that's more of the focus this time around.

A new man for Alexis.
Alexis wryly told her meddling daughters it never gets old when they set her up with Mac. Even she's tired of it. If they're not going to go anywhere with these two it needs to stop. Besides, I'm not sensing any chemistry between them anyway. While Mac may not be the one for her, someone needs to come in and shake up her world. I don't know that Ric could ever be trusted again, nor should he really be forgiven for sleeping with her daughter Sam, but I loved him and Alexis as a couple. I don't think Rick Hearst is being used to his potential on "The Bold and the Beautiful" right now, so why not bring him back? Or, they could recast Ric with Vincent Irizarry, who is out of a job at the moment since "All My Children" went off network TV. It hasn't been announced if Irizarry will be joining All My Children online or not, but I think he'd have great chemistry with Nancy Lee Grahn. Either as Ric or someone new. What do you think? Vote in our General Hospital Poll: Who Should Alexis Be Paired With?

Since I'm not quite sure what to make of Johnny after last week, that's all I got this time around. What did you think of last week's "General Hospital?" Feel free to share your thoughts below.