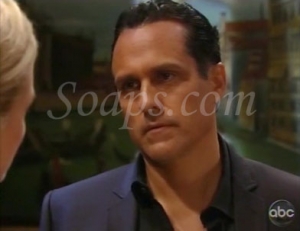 Not a chance. (Soaps.com)

The things that stood out the most for me last week centered around a few returns and a few smaller moments. Let’s break it all down.

She’s back?
Anthony visited a comatose Lisa last week. All I have to say about the thought of her returning is: Crap. I really have no interest in seeing her wreak more havoc for Patrick and Robin. What do you think? Vote in our General Hospital Poll: Should Lisa Return?

An iffy return.
Luke also reappeared last week. While I haven’t missed the character, I was glad to see he was still apparently guilt ridden over all that’s happened. He shouldn’t be let off the hook for Jake or his alcoholism any time soon. I especially liked that Skye wouldn’t tell him anything about his family, suggesting he find out what was going on himself. Instead of doing that though, Luke just lurked and eavesdropped. Even though Luke has never been a favorite character of mine, he is back, so I hope he doesn’t hide in the shadows for too long.

A more welcome return.
Kelly Sullivan debuted as Kate Howard last week. While she’s not Megan Ward, I thought she was believable in the role and I am glad the character of Kate is back. A recast is a tricky thing especially when the character is so beloved, but I think after time, she’ll make it her own. The real test will be if she has any chemistry with Sonny, although, I might prefer to see how she fares with Coleman. But if she and Sonny do spark, I can only hope she is the one who helps facilitate his redemption. While it’s interesting to watch Sonny be on the outside looking in everywhere these days, I’m a little tired of hating him.

Suspension of disbelief.
In her quest to find Sam's engagement ring, Maxie jumped into the dumpster outside Luzetta's to look for it. While mildly amusing, I'm always taken out of a scene when a dumpster is seen on a soap because they are always clean and shiny. Have the people in the prop departments ever seen a real dumpster? They are grimy, dirty and gross. I wouldn't enter one to look for anything. I think a couple on "The Young and the Restless" even had sex against one once. That would never happen in real life. If it did, they would probably go out and get tetanus shots afterwards. To top off Maxie's dumpster diving, Spinelli ate frosting off of it. Really?

Renewed interest.
I've really been enjoying Johnny lately. He's been smug and cocky and just generally charming. I hope he gets a new storyline soon though, because just watching him following his father around is wasting his newfound appeal.

A changed man.
Spinelli finally returned for good, but something seems to be missing: He can't remember where Sonny's money is or even how to use his cyber skills. I'm liking this twist. Unlike Jason, who remained exactly the same after his feared to be life altering surgery, Spinelli is the same man, but with a hitch. It will hopefully be interesting to see how Spinelli, the Cyber Assassin, deals with not being able to do what he is best at and known for.

Odds and ends.
I loved Tracy telling Lulu she needed to get over herself and figure out how to be in an adult relationship. We'll see if Lulu takes her sage advice.

Shawn's purpose on the show is questionable at best right now, but if he continues to show up shirtless, I don't care what he does during his time in Port Charles.

Kristina is officially her father, as evidenced by her attitude towards Matt about her surgery. This could actually be interesting, as she grows into adulthood and continues to display Sonny-like behavior traits.

I'm looking forward to Sam and Jason's wedding week and all the wackiness that is supposed to ensue. To find out what's to come, check out Soaps.com's Video Interview with Steve Burton and Kelly Monaco.