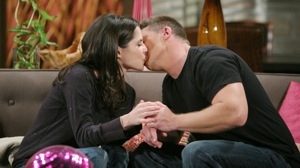 “It’s kinda cool how it all pans out because it’s very much our characters.”

Jason and Sam’s wedding day finally arrives, but it involves a whole week’s worth of festivities, including a trip to a Chinese restaurant and a visit from Franco [James Franco]. Soaps.com recently chatted with Steve Burton and Kelly Monaco to find out what’s in store for their characters’ long awaited nuptials beginning September 19.

Steve: Hey, Lori. How are you?

Kelly: Hi Lori. How are you?

Soaps.com: Good, how are you two doing?

Soaps.com: Thanks so much for talking with us today.

Soaps.com: So, Sam and Jason’s wedding is next week.

Steve: It is all next week.

Kelly: All next week. [laughs] Yes.

Soaps.com: Things don’t exactly go as planned and they end up in a Chinese restaurant. How does that happen?

Steve: Oh, man. It is a long story, but I’m going to make it real short for ya. You know, the idea of them getting married, first of all, was pretty crazy. Sam really isn’t the marrying type – Until she found the right guy – but Jason kind of wanted to show Sam, ‘Hey. I love you. I want to be with you. This is what I want to do. I want to commit to you. I want to get married.’ Of course, at first she was a little gun shy, ‘No. No. No,’ but then, we decided to get married.

Kelly: Go along with everyone else’s idea of what our marriage should be.

Steve: Right and have a traditional wedding. Give Sam, or every woman, what they would want for a wedding, so we kind of go down that road. Start planning things, start picking things out.

Kelly: Lo and behold it’s a little overwhelming for both of them and I think they find a moment where they say, ‘Let’s go take a breather,’ and [they] go for a ride on the bike and end up in a Chinese restaurant where the opportunity comes up and they’re able to get hitched without anyone else there. And it worked.

Steve: And it was great. But then they have to go back to the ceremony where the friends and family are waiting. Angrily.

Kelly: At the big traditional wedding.

Steve: Yes. And Franco is looming at the ceremony. So, it’s a fun filled week for us. So you have to make sure you tune in and see what happens.

Soaps.com: Basically there are two ceremonies that they have to get through.

Steve: There’s a few different things they have to get through.

Steve: Yes. So, it’s kinda cool how it all pans out because it’s very much our characters.

Kelly: The best of both worlds too. It gives a taste to every…

Steve: To everybody. And then we have our honeymoon. So, there you have it.

Soaps.com: So Franco does not interrupt the honeymoon. You guys still get your happy ending?

Kelly: We can’t tell you that.

Kelly: I know something he doesn’t know and I can't tell you guys because you'll know and then he'll know 'cause I told you. So, I have to keep it to myself. But, stay tuned in because I think there might be a couple of interruptions.

Steve: But we do have a honeymoon. That's the good thing. We just want to have one day where we're kind of happy and have a honeymoon and we'll deal with everything when we kind of get back to Port Charles.

Soaps.com: How does Maxie [Kirsten Storms], the wedding planner, take the change in plans?

Steve: Maxie's not happy. She's not very happy anyway, in general, so this really made her really not happy. And really, Jason doesn’t care at this point. [smiles]

Kelly: He just gets her hammered at the reception, so she forgets about it pretty soon.

Steve: That’s how we deal with Maxie.

Soaps.com: [laughs] Ply her with liquor.

Soaps.com: It looks like the Quartermaines show up. Is Jason sort of warming up to a relationship with them?

Kelly: They've definitely been bringing that into the picture.

Steve: Our exchanging of the rings is actually very cool. It brings a lot of history back on the show and in our relationship, so it's a great moment.

Soaps.com: How do you feel as the actors portraying the characters about them finally getting married?

Kelly: I think it's awesome.

Steve: I mean, we're married, but we haven't really been playing married yet because we just got back from a break on the show. Today we're actually doing the honeymoon scenes. It's going to be cool. We're looking forward to seeing what happens next. If it's family, if it's Franco. I don't know.

Soaps.com: That would definitely be a big twist.

Soaps.com: Speaking of children, do you think Sam and Jason should bring children into their lives?

Kelly: Should they? Probably not because they're both dangerous, outlaws, but do they want? I know Sam probably deep in her heart definitely wants a family and wants kids. Whether that comes through adoption or having kids with Jason...I don't know if it's going to happen. I really do know what's going to happen, but I'm not allowed to say.

Steve: She's teasing you guys. I don’t know. We'll see what happens. That obviously will probably be part of the next story for us. Deciding whether to have a family or not. That's the next chapter.

Soaps.com: Finally, will Spinelli [Bradford Anderson] still be living with Jason and Sam?

Steve: [laughs] I kind of hope he does. I love Spinelli.

Kelly: I kind of hope they get their own place.

Kelly: She's got hers, he's got his. Maybe they should get something together.

Steve: We'll see what happens with Spinelli. Maybe he can have the penthouse across the hall.

Kelly: Oh, that Sonny used to have.

Steve: And everybody else. Yeah. We'll make that a priority. We'll see what happens.

To watch the video of this interview, go to Soaps.com's sister site Soap Opera Fan Blog at Video Interview With General Hospital's Kelly Monaco And Steve Burton. For more of what's to come, check out General Hospital Spoilers: Jason and Sam's Wedding. Join us on Twitter @soapoperafan, and Facebook. Come tweet and Facebook with us about "General Hospital," all the other soap operas, "Glee," "Grey’s Anatomy" and "Vampire Diaries!"

Posted 32 mins ago
Posted on: Deadline