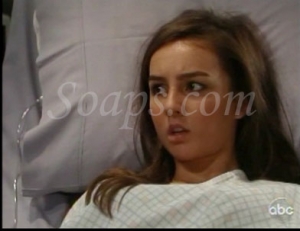 Lonely at the top. (Soaps.com)

While still not thrilling me, last week’s “General Hospital” has given me hope for what could be. There are glimpses of promising storylines about to break, so let’s get to it.

It’s about time.
I loved Steve and Olivia’s sexy shower scene. I especially like that there’s a mystery forming regarding Steve’s past. When Olivia suggested they visit his old stomping grounds, Memphis, Tennessee, he quickly diverted her attention elsewhere. What is he hiding? I don’t know, but after almost two years of him being back in Port Charles, I’m excited he is finally getting a storyline of his own. What do you think Steve is trying to keep covered up? Vote in our General Hospital Poll: Steve’s Secret.

Same story new characters.
The writers just crafted a story for Jason based on his long ago car accident that was affecting his present. In the same week that Jason woke up from his surgery resulting from that decades old injury, Kristina underwent surgery because, as it will be revealed this week, of the bomb Sonny planted for Johnny, but endangered Kristina a year ago. It’s great to use history to form current storylines, but they are relying on the exact same plot device for two different story arcs in the same week. It seems like they could have come up with something else to differentiate it a little bit.

Dr. Badass.
Patrick didn’t take any crap from anyone last week, including the town mobsters. He ordered crazy Anthony out of his hospital, laid down the law with Jason, who wanted to leave the hospital early, and didn’t kowtow to Sonny, who demanded he save his daughter. In fact, he put the off-his-meds Don squarely in his place. Patrick has his sensitive moments with Robin and his daughter, but he is no pushover. Being reminded of that last week made me love the character even more.

The wedding planner.
Maxie has fully thrown herself into planning Sam and Jason’s wedding. Her overeager enthusiasm has been a bright spot in a sea of otherwise less than enthralling storylines. What I really like though, is that Sam isn’t all that concerned about the wedding. She’s just happy to have Jason back and alive and could seemingly take or leave the actually wedding. It’s refreshing to see a woman on a soap not act so single minded when it comes to getting married.

One is the loneliest number.
While Maxie has been fun to watch flitting around about the wedding, I felt for Matt. She couldn't take the time to actually listen to him and hear about his research getting published. He may have talked a good game to Liz about liking that he and his girlfriend have equally busy lives, but after Liz left him to celebrate alone, he seemed a bit disappointed to have no one to share his good news with. Like Steve though, at least he's getting a bit more of a story on his own. Now, he just needs a romance the writers will actually give proper attention to.

She's back.
Kate returns this week. She'll have a new face though as Kelly Sullivan is taking over the role from Megan Ward. I had my doubts upon viewing her original headshot, but after seeing a photo of Kelly Sullivan made up as Kate Howard, I'm a bit more optimistic. She looks every bit the part. While I adored Megan as Kate, I'm glad they are resurrecting the character and I look forward to seeing what Kelly brings to the role.

Odds and ends.
As Lucky tried to go cold turkey, I prayed he would kick the pills as quickly as JR Chandler got sober on "All My Children" so we could be done with this storyline.

Of course Edward immediately knew Ethan was appealing to him on Skye's behalf to help get her out of town. It was sweet that he told Ethan Skye always had a home there no matter what she did. Relationships and moments like those are what gives me hope about the show. Too bad Skye's leaving this week though.

Michael and Abby were cute at the coffee warehouse. I enjoyed their romantic moments and have hope Michael could come into his own with his new job.