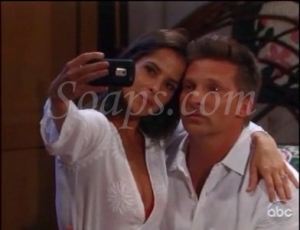 How will her past haunt her? (Soaps.com)

There have been many great character interactions lately, Alexis and Carly’s recent showdown for instance, but there’s still nothing really gluing me to the screen these days. As I wait for that one great story to command my attention, let’s break down what did happen last week on “General Hospital.”

The more things change, the more they stay the same.
The fantasies of Jason showed three of the women in his life that things could have still turned out bleak if they had gone the way they wanted. I’m not sure they had to go to worst-case scenarios, but I liked the wisdom Jason imparted with Carly, Liz and Monica about his place in their life and what they needed to accept about him. Since Jason and Sam ended up happy in her fantasy though, I’m guessing he will wake up as the Jason we’ve known for the past decade or so. And since Sam got pregnant in her alternate world, does that mean she’ll end up pregnant back in reality too?

New boy toy?
I’m intrigued with Skye and Johnny. I was thrown at first when they started flirting and kissing out of the blue, but I loved that she turned the tables on him by tying him up and leaving him in her bed. There’s something fun and sexy about them. I know that last week I was all about Johnny with Abby, but I’d like the writers to spend time on these two as well. Johnny’s a single, good looking guy. He can explore his options. What do you think? Should Skye go down the Johnny Zacchara path, or should she spend more time with someone else? Vote in our General Hospital Poll: Skye’s Screen Partners.

No break from the past.
Oh, how I wish Kristina overhearing Ethan telling Skye he just felt sorry for her was the end of these two. As he keeps saying, she is way too young for him and I’m embarrassed for her every time she throws herself at him or ignores his rejection. They need to give Ethan a new exciting love interest and put Kristina in college where she will meet someone more age and maturity level appropriate. Of course, she has to figure out what is wrong with her first. Supposedly it has something to do with the past that could be Sonny’s fault. Jason just suffered seizures due to his accident from years ago, Tracy’s time with the Soleitos is coming back to haunt her and every character has recalled their history in the last couple of weeks. It’s all been very nice, but does every storyline post Bob Guza have to be attached to the past?

Avoidance?
Lulu finally learned that Lucky had been forcefully shot up with drugs, but she didn’t really believe him. Of course, Lucky stopping outside the house where she could have seen him pop a pill didn't really help his case. She's right not to fully trust him, but wow, she was such a shrew in those scenes. I was actually glad to hear Lucky tell her off. She also totally overreacted by breaking up with Dante for not cluing her in on what's been going on with Lucky. It’s not that Lulu doesn't have a few good points, but she went from being totally in love with him to dumping him, despite the fact that he was actually looking out for her brother. Maybe it's just her way of not dealing with her fear of moving in with him.

Hospital shenanigans.
I'm disappointed that it seems they are pulling Maxie and Matt apart. They never gave them the attention as a couple that they deserved. And I'm not feeling the chemistry between Liz and Matt at all. Speaking of Matt, I'm tired of his and Patrick's rivalry and Patrick's disregard for his wife's ability to be chief of staff. A real story needs to come into play here. And it made no sense why Steve, who was relieved of his duties as chief of staff and sent to the E.R., was involved in the sting operation regarding Anthony instead of Robin. Not to mention, if the cops were really involved, where were they? It was a pretty lame set up overall.

Back for good?
Spinelli broke my heart again last week as he peeked through his Jackal P.I. persona to plead with Jason to return to them. I just hope his breakthrough means Spinelli is back for good. I recognize he might need to go see a therapist to work out some of his issues, but hopefully the Jackal P.I. is a goner. If he is, what will that mean for Spinelli and Maxie?

Aside from loving Tracy and Lulu's heart to heart and feeling that Shawn needs to get a life outside of Carly, that's all I got this time around. What did you think of last week's "General Hospital?" Feel free to share your thoughts below.