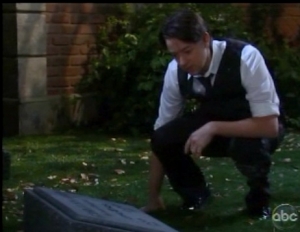 Last week proved Liz needs to rethink her line of work, Jax said goodbye to Port Charles again, Spinelli revealed his pain and women fantasized about Jason. It was a pretty decent week all in all, but of course there are things I’d like to see unfold differently. Let’s break it down.

In need of a career change.
Elizabeth needs to leave nursing behind her. In addition to the mistakes she made in the wake of Jake’s death, last week, she failed to notice Siobhan’s monitors were off and that she was practically dead. Then, she froze when Lucky discovered Siobhan was in fact dead and did nothing to help Steve try and revive her. Maybe she should return to painting, which used to be her passion. At least she can’t kill anyone with a paintbrush.

Until next time.
Jax left town again after hearing Carly say she was going to keep her kids away from Sonny. Apparently that was enough to make him finally feel safe enough to leave Josslyn in her care. However, she’s made that promise before when she forced Sonny to sign away his rights to his children. That didn’t exactly last too long. I’m not sure I buy Jax leaving his daughter altogether, Sonny or no Sonny, but it was nice to see his character sort of be restored through conversations with Skye and flashbacks of him with Carly.

Convoluted plan.
Speaking of Skye, Jax learned of her association with Anthony before he left. She explained to her ex she was trying to secure her daughter’s future by wheeling and dealing with the mobster. I would think a better and safer way to go would be to suck up even more to Edward. But then she probably wouldn’t have a storyline.

Comedy turns to drama.
What started out as a lighthearted, seemingly throwaway story, has turned serious as Spinelli tries to protect his heart via his alter ego Jackal P.I. Since they've dragged this arc out, I’m glad they've gone this route because just watching him act like a 40's detective wears thin. I'm not sure I completely buy the reasons for his split personality, but watching glimpses of Spinelli breaking through, as he portrays his pain, is not only a great vehicle for Bradford Anderson's talent, but humanizes the situation.

New couple alert?
As I've already mentioned, the powers that be seem to be testing the chemistry between various characters. Last week, it seemed to be Johnny and Abby's turn. I'm kind of intrigued by this pairing. I feel that Abby is too old for Michael and that they've already outgrown each other. Abby needs to be with a man who is already established and who knows what he wants. Sure he's in the mob, which is her main complaint about Michael, but that's who he's always been, so I could overlook that detail. What do you think? Vote in our General Hospital Poll: Abby's Love Life.

On a break.
Max and Diane broke up because she was going on a book tour and she didn’t want Max to wait around for her. Kind of a lame reason. I mean, how long is the tour exactly? I wonder if there is a bigger plan for these two.

What if?
I enjoyed the fantasy scenes the women in Jason's life had of him. It's fun to see Jason in different scenarios even if I don’t necessarily understand Sam's or why the women are envisioning dark things in their perfect worlds. I get the point that things can go wrong no matter what, but if I were having a fantasy about Jason it would definitely involve all good things. While we're on the subject of perfect worlds, here are a few things I'd like to see on "General Hospital:" Lucky to stop crying and to have some fun, Sonny to be a character I can like again, Ric Lansing to return for his daughter and to kick off an umbrella storyline, more of Alexis and Diane's shenanigans, and Nik and Jax to return to the canvas as the strong characters they used to be.